Well, I was all set to provide a peek at one of the surprises I hinted at last time out but there is still data arriving on that front, so I have instead scoured the archives here to provide a look at some packaging for 1972 Topps baseball with a short side trip to E&V land.

Now, there is not much more to write about on this set as it is well documented and not difficult to suss out its secrets. It is the last baseball set truly issued in series (1973 is a hybrid, series-wise), contains a handful of variations pertaining to some Cubs cards and checklists and sports zero short prints, as Topps ironed the final wrinkles out of their production cycles.

For simple reference, here is a sample '72 card: 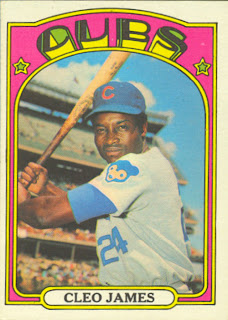 Yes, it's pink and no, that is not the first time Topps used that color on a baseball card. Those psychedelic colors on the front are where five Cubs variations lie, in case you were wondering.

Cubbies numbered 18, 29, 45 and 117 can be found as shown above, or with green slivers under the C and S in "Cubs" while and 534 shows the team name also as above or all in yellow, with no green highlights in the name. Here is a peek at the James variation, which you can compare and contrast with the one above (sorry, I can't blow it up anymore):

Those are pretty hard to find, by the way. You can imagine what the full yellow team name variation looks like.

The 2nd, 3rd, 4th, 5th and 6th series checklists also have some slight text variations, as many Topps checklists did before them. Those five are the only double printed cards in '72 though, also a common feature of checklists past. (Variation information from Dick Gilkeson's Baseball Card Variation Book, Vol 2).

The wax pack was quite compelling in '72, juxtaposing the old and the new: 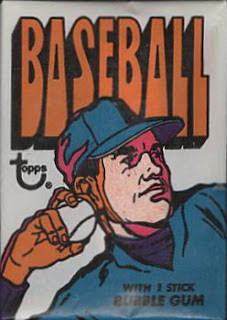 The wax box echoed the design of the packs, shown here in a grab from E-bay:

However, there was still a twist lurking within the '72 Jumbo Packs. You will recall the Jumbos outside packaging from a previous post and while I own one from this very year, I am too lazy to scan it on what is a dreary day here at HQ. So I'll use another source to illustrate its staid look: 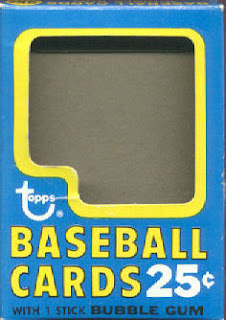 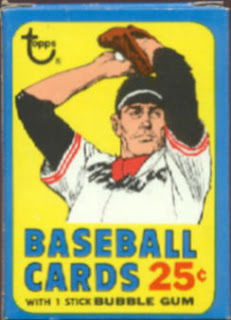 These of course contained a clear plastic overwrapped pack as Topps would refer to it (we would call it "Cello") and this box housed a nice little brick of cards. The box however is odd as it shows cards that do not resemble the 72's at all, with yellow borders: 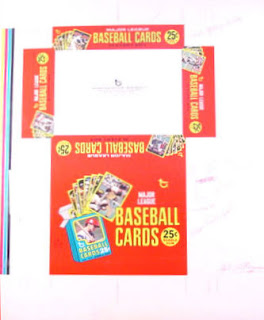 This was something Topps was good at, the feint-with-one-style-while-issuing-another look and it's really not all that big of a deal, but for a rainy Sunday with not much else going on, it seems perfect.
Posted by toppcat at 10:40 AM