Once Topps eliminated the insert cards and stopped producing all of those oddball supplemental sets, no doubt due to rising energy and production costs in the mid 70's, they next turned to reducing the size of their baseball cards. As you can see below, they double decimated the standard 2 1/2" x 3 1/2" card to 2 1/4" x 3 1/8" in size. This was almost the same size as the revered 1951-52 Bowman issues, so it wasn't as radical a move as it first appeared. Here, see how the two compare: 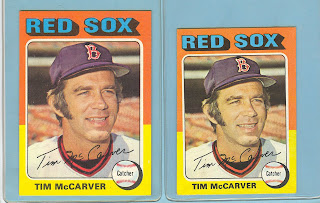 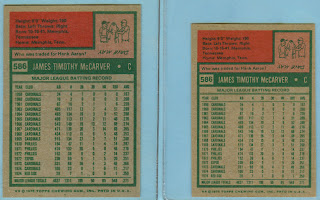 From what I can find, the Minis were first reported to collectors at large in the June 1975 issue of The Trader Speaks. Here is what their readers saw:

Those collectors in California would have seen the same wrappers everyone else in the country did but with the appropriate reduction in size. 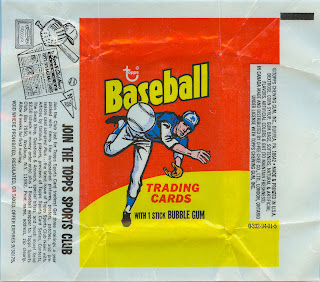 (Thanks to all around good guy King Yao for the wrapper!)

Since we did not see smaller cards in 1976, we can only surmise the fantastic voyage of the '75 Minis failed. Minis once sold for about twice what a regular sized '75 goes for but that ratio evened out in the past fifteen years or so. Twenty years ago I wondered why the Mini's sold for a premium when it was common knowledge among us weekend warrior types that you could practically place an order for an unopened wax box (they also came in Cellos and Rak Paks) but it was not until the 2009 REA auction that the answer was given. Charlie Conlon, a well known Michigan collector and dealer had bought out a wholesaler in his home state once he noticed the smaller cards were being sold in the Mitten State.

REA managed to grab ahold of 26 wax cases and two cello cases! One can only surmise Charlie had hundreds of cases in 1975 when he made his discovery. Coyly hiding the size of his find (and somehow managing to sat married) he parlayed his mini cardboard gold cache into a sizable collection (scroll down to the bottom of the linked page to see the Minis and marvel at the rest of the eye candy while you are at it).

There were probably a couple of other pockets of distribution but ol' Charlie had quite the hoard, didn't he? I suspect they will go down even further when compared to the standard size cards as this massive collection gets distributed among the far flung collectors of this issue.
Posted by toppcat at 6:56 PM

I picked up some singles and cello packs that were still very cheap back in the late 70's.

WHY I did not pick up more as I always thought the cards were very cool, BUT maybe now there will be enough on the market to buy more?

If demand for these cards are still there, then maybe supply will keep up with those looking to add mini's to their collection??

Thanks for the story. The 1975 is one of my all time faves, but I've never felt the need to chase the mini set.

The auction page was interesting. I always thought that the wax boxes for the '75 were really neat. I see that the cello boxes are quite the opposite. Man, they're ugly.