Today's post just about came pre-written and gift wrapped, courtesy of Jeff Shepherd, who provided all of the scans.

If you collect 1976 Topps Baseball you either love or hate this card: 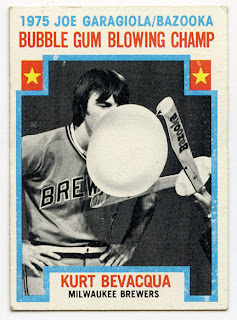 My innate gravitation to all things odd means I love this picture. That's an 18 1/2" bubble by the way! The back of the card always intrigued me too: 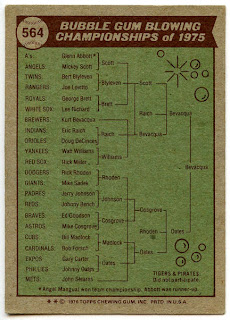 Why is the back so awesome?

A) The brackets are great;

B) The fact the Tigers and Pirates did not participate always struck me as odd;

C) The little bubbles are neat-o;

D) The A's had to use a substitute bubble blower!

Now I had always assumed each player in the finals just had his best bubble measured in spring training by Sy Berger or something like that. Little did I know this was a highly organized event! 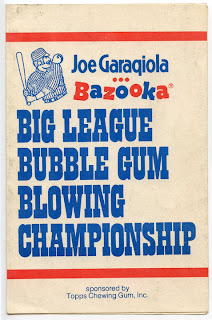 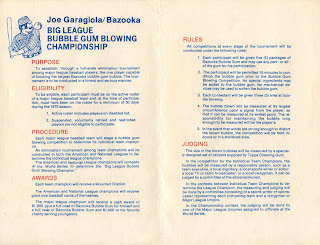 I find it hard to believe the contest was so complicated! Among other things, the rules state: "The tournament is to be conducted in a formal and serious manner." Yeah, sure...... The winner got a thousand bucks and a case of Bazooka, as did his favorite charity.

Here is a picture of the finals: The man with the calipers sure looks formal and serious....geez, lighten up Bud!

What you are seeing above is Joe Garagiola (he was a major TV personality at the time on NBC) watching the final blowdown between eventual winner Kurt Bevacqua of the Brewers and Johnny Oates of the Phillies. 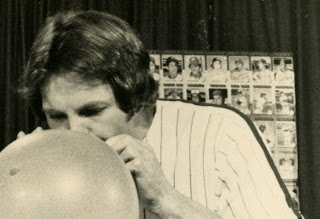 That's an uncut sheet of 1975 Topps baseball cards behind Johnny Oates. Take a look behind Joe G, you can see another uncut sheet: 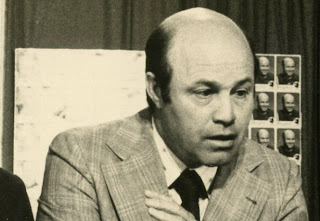 That, ladies and gentlemen is Garagiola's ersatz 1973 Topps business card. I think it highly likely said pasteboards were created for him to hand out at this event. The card does have a 1976 copyright on it and I have to think the contest was held after the end of the '75 season based on the Joe G. card copyright date.

There is more at this site though I'm not certain all the facts presented are correct. In addition, the contest rules state the player had to have spent 30 days on an active major league roster in 1975.

I wonder how long this was actually held as an annual event?
Posted by toppcat at 6:29 PM

This card was the last one I got to finish my 1976 Topps set! Of all the cards to end up missing... no big price tags, just the Bevacqua Bazooka card...

Hey nice post Dave - I forgot to mention I have a pair of those Bazooka calipers somewhere in the archive.. can't be too many of those around...