Last year I posted about a very rare Topps proof set from 1966 commonly referred to as Punchouts but technically known as Punchboards. Since then, I have been receiving e-mails and scans from a gentleman (who shall remain nameless at his request) who inherited a small cache of these. After going through his stash he has managed to add 9 players, or 4 1/2 full cards, to the known checklist. He has also been kind enough to provide scans and I thought this would be a great time to show a visual checklist of the set and discuss some of its slowly revealed nuances.

As it stands today, the known checklist is comprised of 14 full two-card panels featuring 28 players. For reasons I will get into below, I do not believe this to be a complete checklist, although it may be close. Here is the latest, in alpahabetical order by the name of the NL player shown on the card (each has one NL and one AL player).

As you can see, the distribution of teams is not even and some are missing. Five teams remain unaccounted for: one from the NL (Astros) and four junior circuit teams (Angels, Athletics, Indians & Senators). The Twins, participants in the 1965 World Series along with the Dodgers, have four players in the set while the Giants, Red Sox and Yankees have three apiece. The Dodgers, Cubs, White Sox and Pirates net two players and the remaining known teams have a sole member represented.

If you want to speculate (and I do) then there should be at least four full cards to add as that is the minimum to make sure all teams are included. That would bring the total to 18 full cards, with 36 players on them, a number that is not implausible. However there is another wrinkle that throws a spanner in the works, namely the distribution of positions:


A definite pattern emerges here. The six "infield" positions each are represented by no more than two players per league, while the outfield slots top out at five. If we were to add two NL second baseman to the mix, we would need at least an extra card beyond 18 (assuming one of them was on one of the four theoretical cards added to round out the team distributions). 19 is a very unwieldy number for a small Topps set (although not impossible as the 1968 Plaks have shown) but there is yet another clue, which is the uncut sheet configuration.

As will be made reasonably clear in the visual checklist, there are nubs on one, two, or three sides of each full card as they were attached to each other at some point. I made a jigsaw puzzle from the scans and while it required a couple of educated guesses on "nub positioning" I believe the known cards were oriented as shown in the schematic below but cannot determine how many middle columns there were (I ciphered with the NL players at top and each number indicates how many cards have that position on the "sheet"):

Now, if the cards were oriented differently then the distribution could change as a bottom right corner could become an upper left, etc. and I also do not know if more then one middle column was printed. Another complicating factor is that two to four copies of each card may exist as our mystery man has two copies of some and I have identified a couple myself from other sources. In addition, Topps would usually keep one or two reference copies, two of which have been known for a while (Marichal/Rollins and Roseboro/Richardson). It's enough to drive you batty! What is clear though is that no card has four sides with nubs so two rows high looks to be as tall as a sheet can get.

What does this tell us then, other than the fact I am clinically insane? Well, it might mean there are 30 cards in the set (5 sheets of 6 cards each) or that maybe there are only three sheets of either six or eight cards apiece (if there were two middle columns). A yield of 18 works if you eliminate one of the missing NL 2B positions and add four cards as discussed above but I don't like the missing NL 2B position if you do that, as I have to believe the 2 players per league per position for the infielders is a set figure. You can get a nice distribution with 24 cards/48 players though if you assume there could be 8 pitchers, 10 infielders (excluding pitchers) and 6 outfielders per league which would also allow for common multiples of 4, 6 and 8 but that is adding a lot of cards and my source thinks he has most of them.

But what if there three middle columns giving us 10 cards on a sheet and there were two sheets? Two more pitchers (balancing lefties and righties at two each per league), two infielders per non-pitching position (10 total) and six outfielders per league would certainly fit the pattern (even moreso if you assume 2 each of LF, CF & RF) and give us 20 full cards (4 pitchers, 10 infielders and 6 outfielders) while filling in all the positions and teams. But then there are too many corner pieces (at least three bottom rights or top lefts depending upon orientation). Aaaargh!

Adding up those puzzled out permutations gives a possible 36 cards/72 players at a minimum, which seems excessive to me. Given all this, I am going with the 20/40 count for now as it jibes nicely with the two-per-position theory and necessarily assume there were some double prints created, but this is not iron clad.

Anyway, enough speculation. On with the visual checklist: 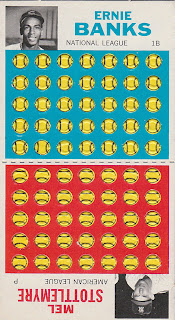 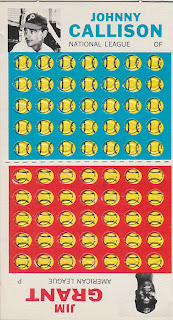 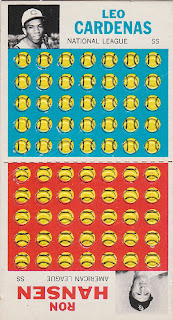 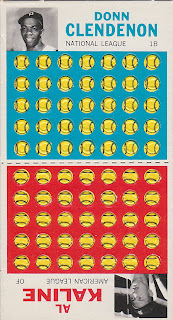 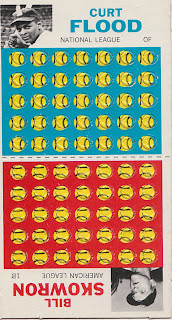 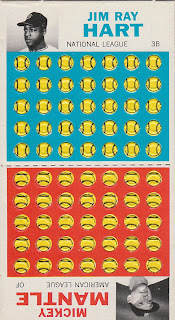 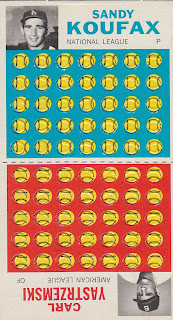 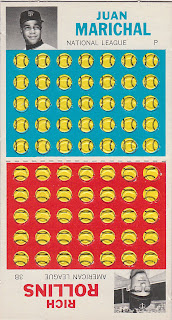 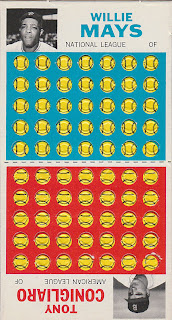 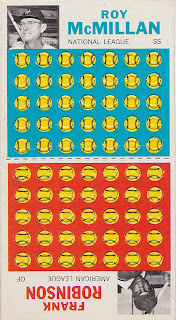 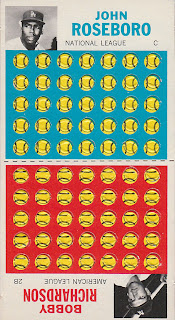 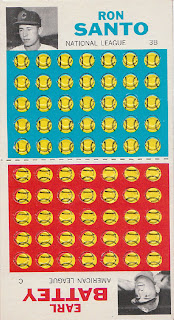 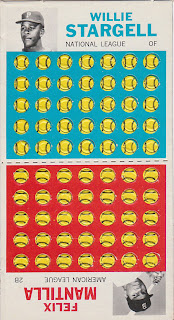 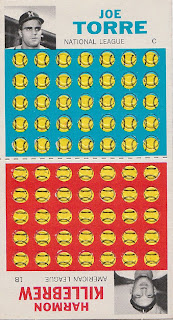 Some of the nubs and edges have been trimmed off since I cleaned up the scans a little. I can assure you no nubs were harmed in the production of this post.

You will note Frank Robinson's airbrushed cap, no doubt a result of his trade from the Reds to the Orioles on December 9, 1965. Since he is shown as an AL player, the cards had to be produced after that date. It is also worth noting Joe Torre is depicted in a Milwaukee Braves hat as the team moved to Atlanta for the 1966 season. I would guess therefore it was a late December '65/early January '66 production cycle for these cards.

Now, given that a box flat was produced, these cards very nearly made it to the retail test level, although I don't think they actually hit the streets given how few surviving examples there are. Instead, I think the game proved unwieldy and was reconfigured for release in 1967. A look at the instructions on the back probably shows why: 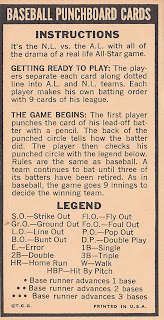 The problem was you needed nine cards each to play the game, which is way too many cards to obtain a dime at a time before you could even start properly poking holes in the cards! The re-jiggered set as issued at retail in 1967 allowed you to use a single card each with a lineup of players on it, a much more realistic scenario for game-playing purposes. Still, these '66 Punchboards were almost finished products, with the possible exception of a score line to separate the two halves. I would love to see a wrapper proof someday; Rob Lifson believes he once had one from Woody Gelman's archives that featured Mantle on it, much like the box flat. I do expect some more players to be uncovered though; time will tell if my prediction of 20 full cards proves right.
Posted by toppcat at 7:52 AM

I could see this kind of set working in a modern context, what with Topps' new computer-recognized cards. You could pick a lineup (all-star, team, etc.), get it recognized by the PC, and play out a Cadaco-style game. Maybe even right in the browser!

The 67 triple panel cellos came 6 individual cards to a pack. The 66 box you have pictured states that it's a 12 count box, 10 cents per pack. Assuming that both the 66 and 67 were priced at the same 6 cards for 10 cents, then the 66 box would have contained 72 cards. The 66 box is not large enough to hold packs containing two 3 card strips. The 12 packs might have contained three 2 card panels, or one thick pack containing 6 cards.

I would lean toward 3 full cards per pack, 6 seems way too thick.

I based my guess of 6 full 2 card panels per pack on facts we know. The 67 cellos were priced at 10 cents and contained 6 cards the same size as the 66 two card panels. The price on the 66 box is also 10 cents, so assuming Topps gave you the same amount of cardboard for your 10 cents, the pack would have contained 6 full 2 card panels. The wax version of the 67 issue was priced at 5 cents and based on the size and notes I can make out in the picture of the box I am pretty sure it contained 24 packs. This puts 72 panels in the box. I don't know what kind of pack the 66 box contained, wax or cello, but the pack was priced at 10 cents and the box contained 12 packs. Logic would put 72 panels the same size as the 67 cards in the box, so the 12 packs would have contained 6 full size panels.
The 66 box is large enough to contain 3 stacks of 4 wax packs side by side, or 2 stacks of 6 1967 cello style strips of two packaged front and back. A wax pack containing 6 thick cards is as unusual as how the 3 panel 1967 cellos were packaged.

Hmmm...I would agree if it was a cello that 6 is possible. Actually, if Rob Lifson had seen a wrapper with an image on it, it would have been a wax wrapper I would guess. I can't see 6 in a wax pack though.

Not sure why an image would be limited to wax. The commonly seen 1967 cello triple packaging displays the same sort of player image as the 1967 wax. Do you have a picture of the wax? It’s a yellow wrapper and the name is obscured. The image may resemble Mantle, but it could also resemble somebody of lesser value.