One of the earlier quirky items in the Topps pantheon goes back to 1956 and the inclusion of two unnumbered baseball checklists that were likely inserted only in nickel packs (and probably whatever larger cello packs existed) and for the first time gave the card buying public a look at the full lineup of players available to collect.

I once thought it was silly that Topps had never offered a checklist card to show who was in their sets but the truth of the matter is they were probably so unsure of what players Bowman would lock up or sue over that a published list might have made them look inept if it was full of holes. Once the Bowman purchase was finalized in the early winter of 1956 it was off to the races and they never looked back.

Topps used a skip numbered approach to the two checklists, showing Series 1 and 3 on one and 2 and 4 on the other. This was a smart move as it allowed a glimpse into the distant future (beyond the next series) and also marks the beginning of their later method of providing a preview checklist of an upcoming series with the prior series' cards. I call this the Theory of Checklist Relativity and I'll be exploring that theme further in 2010.

The two 1956 checklist cards are very basic in appearance: 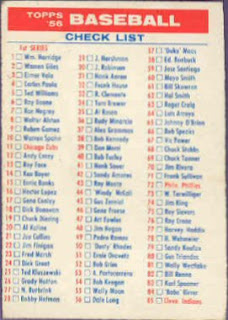 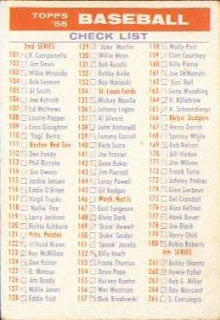 Those above and all the other scans in this post are from long lost sources I am sorry to say. I sold my only '56 Checklist many years ago. The backs are similar but present a slight variation in appearance: 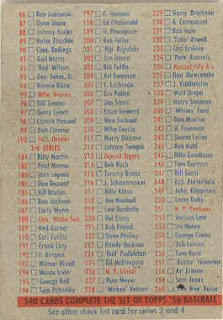 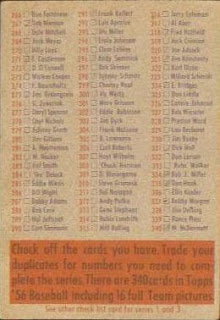 While these are not that easy to find in unchecked, decent shape today and nice examples certainly warrant a premium, there are plenty available on Ebay if you want them. These two backs are likely the same color cardboard, the scans make it appear one is lighter than the other but I don't think that's the case. Notice how the team cards (an innovation for '56) are highlighted in red.

I've been contemplating how and when these were inserted into the packs and the strange cut on the 1/3 checklist indicates it may have been part of a sheet sliced into vertical strips and cut at high speed as the strip moved through the cutter, as opposed to being cut as part of a larger stack that was lying flat when the blade or wire fell.

It is possible the checklist cards were printed on the regular, 110 card halfsheets in 1956 as there would have been some wiggle room, as seen on this first series example: 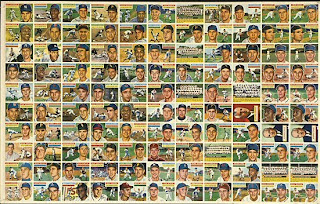 That right hand column is a double print of the one next to it; you could just run a string of checklists down the right side on the final run. However, I doubt this was the case and there were other insert cards starting to appear in '56 so all those contest and promo cards of a similar look may all have been printed outside of the normal set runs. These kicked into high gear with the '56 football set (which also has a checklist card) so Topps was clearly enamored of the process at the time.

To me the logical place to insert the checklists would have been at the end of the first series runs. I am missing a crucial bit of information though, as there is white and gray stock used for the cards in '56 and I believe only the gray stock appears with the checklists but am not 100% certain on that point. If that is the case, it may mean the white stock first series cards formed the first print run in '56.

I also am unaware of any anecdotal evidence of how these came out of the packs and if they only came out of packs with gray backed cards or if they could be found with whites as well. I would also like to figure out if penny packs only came with one color of stock but that is an investigation requiring someone more like Sherlock Holmes to get involved!
Posted by toppcat at 8:18 AM