Topps started their thirteen year run of Bazooka baseball package design (mostly) cards in 1959 with a modest issue of nine large, colorful cards. Hard to find today, especially in nice shape these cards measure 2 13/16" x 4 15/16" when trimmed properly. Found on the backs of 25 count Bazooka Bubble Gum boxes and designed to be carefully (or not) cut out, these are the largest cards Bazooka would issue and appear to have been designed to portray one player from each position on the diamond.

Soon after the nine cards apparently sold through another fourteen were printed up, bring the set total to 23 (or 24 if you count both Hank Aaron variations as his name shows up in either white or yellow, the latter being easier). These fourteen cards are considered to be short printed, so my guess is the first series was reintroduced. Aaron is in the first group of nine so the variation seems to have occurred during the second run of his cards.

Here is a scan of Roy McMillan, from the first run: 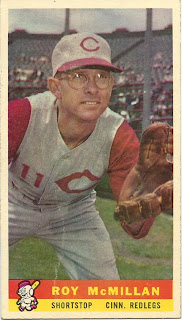 That's a classic looking card if you ask me! 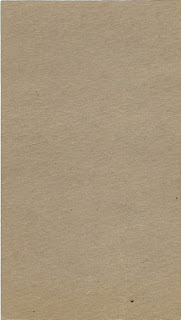 A proof sheet exists that has all 14 short prints and a box displayed, I believe this was from Topps Vault but cannot swear to it. 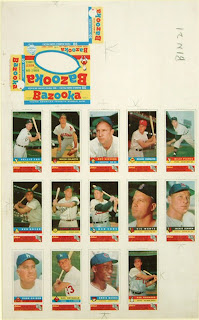 Checklists can be found with ease but the extra prints (all first run) are: Aaron, Cepeda, Crandall, Davenport, Mantle, Mays, Mazeroski, McMillan and Turley. There are two Braves, two Yankees (those teams had met in the two previous Fall Classics) and a single rep apiece from the Pirates and Redlegs in the first run and a whopping three Giants, including Davenport, who was a good but not All-Star caliber player at the time. His inclusion leads me to believe the first series may have been planned as part of a West Coast or even Northern California centered promotion. It also could have been a "soft" test on both coasts and mid country to gauge interest.

Mazeroski was starting a solid run of Gold Gloves and All Star selections in '58 and was a legitimate MVP candidate that year, Turley was MVP of the '58 World Series and Roy McMillan was considered to be a top level shortstop in the late 50's, so all of the players, excepting Davenport, were players you would expect to see in a small set of well known players.

The next batch of fourteen cards repeated no teams that appeared in the first nine cards and brought the representation to the full slate of 16 teams. With the exception of the White Sox, Dodgers and Red Sox, who had two players, every remaining team had a lone player in the last series.

A football set was produced later in the year. I'll explore that another time.
Posted by toppcat at 6:49 PM

Topps could do no harm in using this design for future issues...maybe a Bazooka Heritage series!!