No, we're not here to talk Sinatra, although your webmaster is a huge fan of Ol' Blue Eyes 50's and 60's sides. Tonight it's rings, baby and not those fancy metal ones; tonight we're talking cardboard!

The Topps ring saga begins in 1966 and the bizarre decision to include a set of punchout ring inserts in the football wax packs that year. Check out this wrapper scan from the fabulous-and-then-some Football Card Gallery: 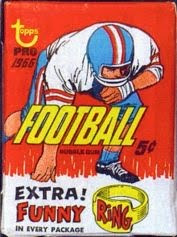 I guess if you're going to pollute a classic football set with a totally unrelated insert, it makes sense to include a checklist for said insert in the football set itself: 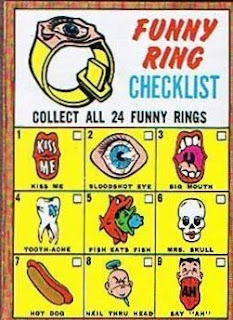 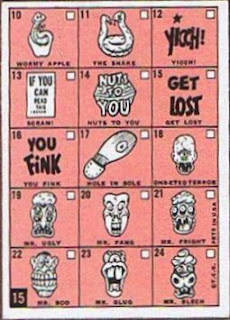 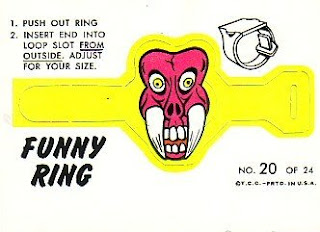 Never a company to let a design go to waste, a set of Insignia rings was included as an insert in Rat Patrol packs the same year, as this cribbed from Ebay scan shows: 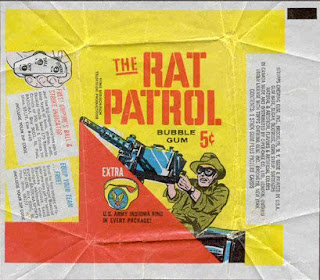 The rings get a metallic makeover, which does not scan well and we lose two in the count: 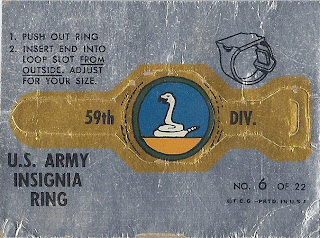 Now this would seem like the end of the tale of the rings but in fact it is not as seven years later, O-Pee-Chee's second series of NHL cards included Team Crest rings (the first series had Team Crest stickers) as this partial box scan from Bobby Burrell's indispensable Vintage Hockey Collector's Guide shows:

Does this ring look familiar? 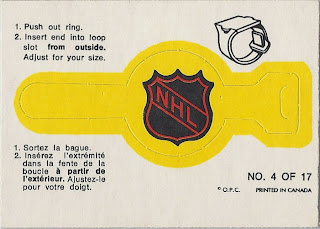 I'm not sure what possessed OPC (Topps really) to reuse such an old pattern but it doesn't matter. These inserts all ring a bell with me! Ouch, sorry for that pun.....
Posted by toppcat at 11:20 PM

Great post on the Funny Ring insert set. The Funny Ring checklist was the last card I needed to complete my 1966 set. It took forever to find a decent unmarked version, so you are correct that the checklist is a "killer". All the time I spent looking for it I kept wishing that Topps had not made it a part of the card set. At least they didn't number the Funny Rings and make them part of the set as well!

In the late '80s I managed to score a bunch of unmarked checklists while going through a guys non-sport album. I paid a $1 each.