I got an e-mail from Scott Gaynor (of Gaynor & Dent Auctions) the other day, inquiring about certain aspects of the 1980 Topps Superstar and undated Puffy Stickers (more on this anon) and as we got into back-and-forthing, Scott sent along some scans of items he had been consigned in 2001 by a Topps salesman. These scans were of different mockups and prototypes used by Topps executives to develop new product and some made it into production, altered sometimes but sometimes not.

These scans will provide fodder for a few upcoming posts but I'll start with an interesting 1975-76 idea for Giant baseball cards: 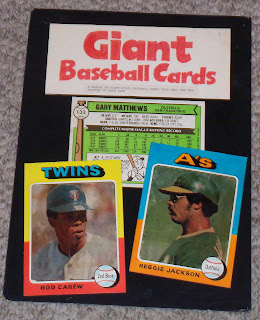 So not only was Topps thinking small in 1975, they were also thinking big! They didn't issue big baseball cards until 1980, and then they spent the better part of the first half of the MTV decade putting out supersized product. This timeline from development to execution was not unusual for Topps back then.

Stay tuned for more mockups and prototypes in 2010!

QUICK UPDATE-An intrepid reader has noted that the back of the prototype is from 1976. In my haste to post, I missed this important detail.
Posted by toppcat at 8:45 AM

Interesting that they show the back of a 1976 card. That picture of Carew looks much earlier than 1975.

I like the cards of the two helmeted Hall of Famers. I wish they had issued alternative cards.

The 1975 design is so imbedded in my memories.

Thanks for the flashback.