Two or three posts ago there was a picture of a rare 1970 Topps Teamates/Grow Power card depicting the one and only Woody Gelman. Let's play a little game to see if we can ID him. Here is a shot of Woody from 1972: 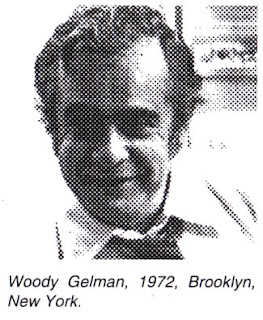 And an earlier one, date unknown:

Credit to the wackypackages.org website on those two-check their site out there is some fab stuff there!

Now, since the back of the Art Department card was not visible, some guess work is in order and I think Jeff Shepherd, in a comment to the original post nailed it. The guy behind the desk is likely Mr. Gelman, which makes sense since he was the Art Director and they most likely posed in his office. Here is a closeup from the Art Department card, previously seen:

And here is the entire card for reference: 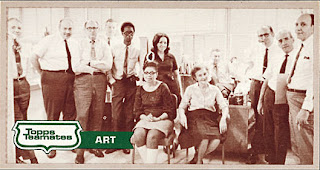 Think the guy behind the desk is Woody? If not, there are not too many other choices!

Woody Gelman was an interesting dude and I've posted the link to his Wikipedia entry before but another click is in order, even though it does not address his role with the Card Collector's Company, which was instrumental in developing the modern trading card hobby.

Intriguingly, there is a print defect in the center of the card. A major faux pas for the Art Dept. shot, don't you think?! Check it out:

The Brooklyn notation on the top scan of Mr. Gelman above is providing me more fodder for a post or two on Topps production facilities. While they moved most of their operation to Duryea, PA in 1965 a corporate office still was maintained at Bush Terminal in Brooklyn for many years after.

Since I've been trying to determine the various locales and sub-contracted firms that did some of the pre-Duryea work (and some post-move work as well) as well as obsessively trying for thirty years to suss out the secrets of Topps uncut sheets, this upcoming series may well be a collaborative, post-as-we-go effort. So if anyone has good, concrete evidence of how Topps printed cards in the golden years, fell free to shoot me a line.