I was working on what I thought would be a pretty quick update to my 1952 high numbers post, which has now turned into a seven course meal that will be taking its sweet time to write itself and so was suddenly in need of something to blog about to end February with. As luck would have it I received via e-mail scans of a couple of 1980 Topps Baseball Coins that completes the known assortment of "metals" used in their production and puts us at the other end of the Topps golden era while I get my notes in order on the highs.

I'll let our contributor stay anonymous unless he wants the publicity but here are a gold Reggie Jackson: 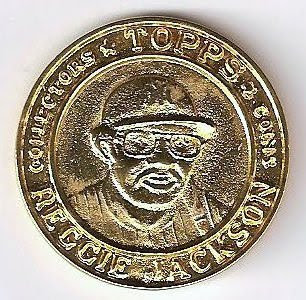 and a Silver Steve Garvey: 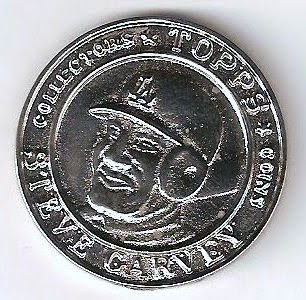 You can clearly see now that the Carew coin featured previously is of the "bronze" variety, as is the other Reggie. Bronze looks to be the poor stepsister to the gold and silver, it's luster is faded compared to the other two. I have to say the gold looks real sharp.

We remain at three players in the known checklist and now have all three metals accounted for. Perhaps one of the "holed" versions will show up i my mailbox someday. I also wonder if all players come in all metals or not. More data is needed but that might be tough with these bad boys.
Posted by toppcat at 5:09 PM

I'd love it if you passed my information on to the owner.