Topps changed their "pushed" inserts for the 1958 baseball and football issues from what had been done in prior years. Gone were the checklist cards which would be delegated, with one exception, to the backs of the baseball team cards and the guess-the-score contests of '57 had been reduced to divining the result of the upcoming All Star Game. 1958 Topps baseball deserves an in-depth look down the road as there are complexities within that far too tangled to reveal here today. A premium was offered via an insert card as well, reprising an experiment from 1956, of which more will be written another day as well. Today campers, we look at those insert cards, couresy of some scans filched from Ebay.

Upheaval was the name of the game in '58 and Topps may have cut back a little on the contest cards in order to deal with the fact two major league teams now played on the west coast. The sole contest insert had an All Star theme: 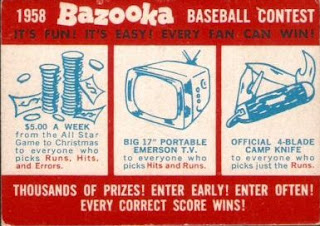 You could not only win prizes but cash! The reverse was the portal to unimaginable wealth: 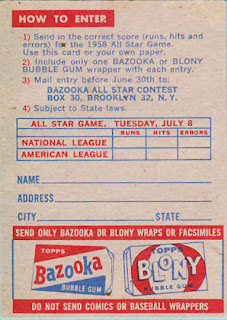 In case you were wondering, the AL beat the NL 4-3 in a closely fought contest in Baltimore, in a game featuring 13 hits, all of which were singles!

You could also get yourself a nice, five inch diameter team emblem 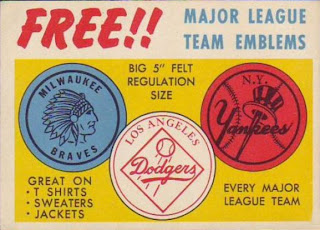 All you needed was a single wrapper and a SASE (hopefully a big one) in order to get your emblem, as we see here: 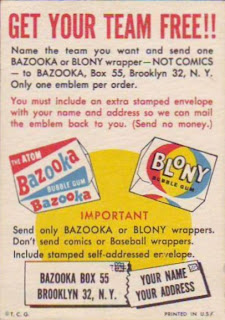 You can see a sample emblem over at the Old Cardboard magazine website. The 58's reflected the new cities when compared to an earlier issue and also hawked the Bazooka and Blony brands. As mentioned above, the 1956 emblems will be addressed another day, as will their antecedent, the 1952 emblems.

Turning to football, all you could do was get a crummy initial: 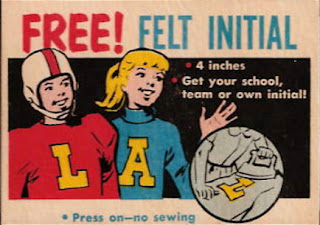 This actually follows an old Topps them of offering numerals and initials so kids could make their own football jerseys out of an old shirt. The back had the details, sorry for the miscut: 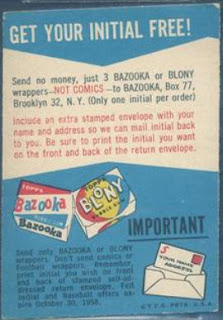 As with earlier pushed inserts, I believe the contest and premium offer cards were printed separately as this misprint indicates: 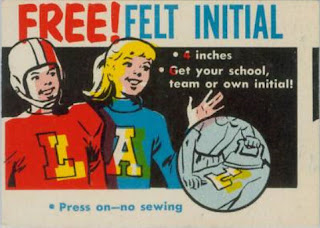 As always, the football insert is much tougher to find than either of the baseball ones.
Posted by toppcat at 8:13 AM