Still drifting toward the 60's time trippers! Time though now to quickly look again at 1959's print runs, helpfully aided by a recent SCD article on this set. I wasn't aware we were both doing our own year-by-year reviews actually so I may veer off elsewhere for a bit for the rest of June-we'll see since predicting how this blog will be created post-by-post is like trying to get a grip on my 401(k), both being moving targets.

I had completely forgotten about the odd, alternating pattern of gray and white backs in each succeeding print run and in reading the SCD piece it became apparent that Topps did indeed print two 66 card semi high series in '58. Courtesy of SCD, the print runs have the following patterns:

This confirms the 110/88/88/88/66/66/66 press runs too and shows how the 5th and 6th series really could not have been printed together or in some combination with each other. I'm not going to regale you with scans of each flavor but the jumping around of the card stock indicates to me either:

b) more then one firm printed the cards due to high demand. From what I have been reading of late, Topps printed cards at various locations in Brooklyn and also printed cards in Philadelphia at Zabel Brothers. The Zabel Brothers story is starting to reveal itself to be sure but Philly seems to have been a focal point Topps' non-Brooklyn printing since 1951, as described here in too many posts to link. I still believe Topps sometimes printed cards in Rochester, NY when there was a need for whatever reason but that is still tenuous and I think that practice may have ended a little after they bought Bowman.

While they did not just slap together a high number series in '59 like the year before (which we know due to the seventh series checklist starting at #496 and not #507) the nosebleed section still was littered with rookies and no-names for the most part, in addition to the All Stars and a few other special cards. Seven series must have kept their sales force busy!

I showed a '58 penny wrapper last time so feel the need to show it's baby brother: 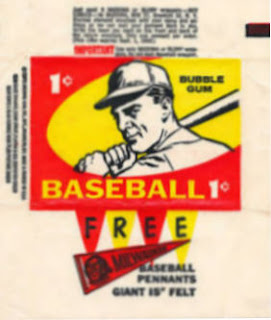