I would be remiss if I did not take a peek at the 1960 Topps Baseball Checklists before diving into the expansion-era sets. The 1960 set was covered here over a year ago when the various flavors of card stock that were used in the set were examined in almost excruciating detail.

Well, there is not a whole lot more to the tale since 1960 was straightforward in execution, with seven series issued and a run of checklists on the backs of team cards that didn't match the series as printed. Here is the high number checklist from the back of the Red Sox Team: 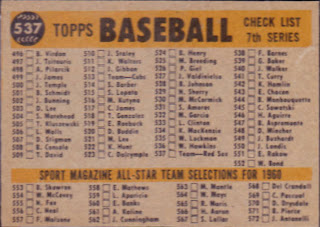 Other than Walt Bond being hung out to dry and the inclusion of the All Star Selections, the only other thing about this card back is that is lags 11 behind in number when what was printed is compared to what is stated. I am finding that in 1959 and 1960, the series lagged either 11 or 22 cards behind what was printed. This was possible due to Topps printing a 110 card first series but only showing numbering to 88 on the 1st series checklist, evidenced by the reverse of the Dodgers Team: 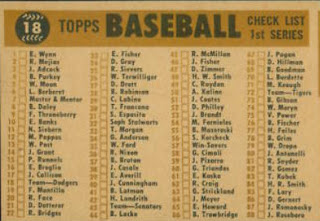 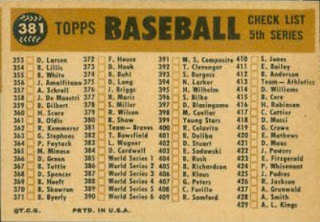