364 days ago I posted on the 1965 Topps Hot Iron Transfers, a crude insert that came with the mid-series 1965 baseball cards. The gist of that post was that the Transfers, despite an old checklisting error, were a static set that hadn't changed since 1965. Then Chris Stufflestreet over at the Vintage Sportscards blog received an e-mail that has rearranged the very fabric of time and space. OK, it didn't even rearrange the fabric of a white T-shirt but was novel nonetheless:

There is variation with the Ron Hunt Transfer. I'll let Chris explain it all and try to take a closer look at the printing and packaging aspects of this set here.

I flipped and lightened the scan Chris received so you can see the difference: 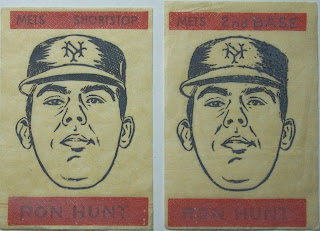 I would agree with Chris that the Shortstop version likely was printed first. Now, does Chris agree with me that the image looks like John Candy?

If we take as true that these were printed in three runs of 24, then at least one run must have undergone a second printing. I had heard years ago a group of these were tougher than the rest of the set but details were (and are) sketchy on that. If Topps started seeding them into the last run of 2nd or 3rd series packs (after the Embossed cards finished off) then maybe a quick first run produced the SS variation and it was corrected for the next. The Transfers would then have been issued 24 per series through the 5th or 6th series.

Now when you look at how these were printed it's pretty obvious little care was taken with these, a common practice with the cheaper 60's inserts. 1965 was probably the last year Topps printed the baseball cards in Brooklyn, before moving production to Duryea, PA (or it was the first year printing took place there) so I wonder if they intentionally created inserts that were simple to design and execute? Both inserts are very generic looking, aren't they? I'll have to take a look at the Embossed set soon here but they are not exactly high art.

This Mazeroski Transfer shows how badly things could go awry in the printing process: 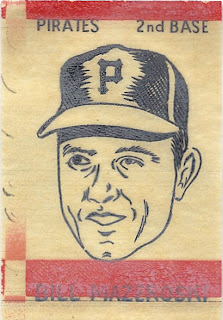 That is flipped obviously but shows the side printing occurred on. You can see that the black in was applied first as it is partially obscured by the color bar but that checkerboard pattern sitting lower left is just bizarre. I have to think the blank area was left as a guide for the cutting machine as shown a little more clearly on the Mantle: 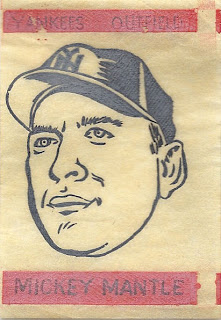 We still have the checkerboard effect. Topps would use a different method to guide the cutters of the 1966 Ruboff inserts (another future post), namely a a black bar dead centered at the bottom of each piece which could have been developed due to problems in cutting these.

The Blue Transfers had a different problem, namely a lack of clarity name-wise. Look at this Lee Maye Transfer to see what I mean: 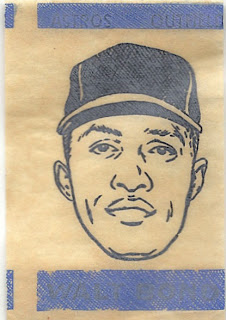 Miscut but no checkerboard. Good luck reading his name though! That may be from the end of a run but the blues are harder to read, at least in my experience.

You also have a fair share of black print oddities: One thing though, is that some Transfers have thicker lettering and I am not sure if it is due to over-inking or a design change. The Willie Mays Transfer shows this effect: 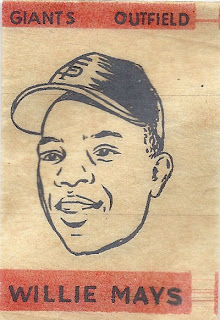 I would not be surprised if other variations lurk within. This set is not widely collected and is a little harder to find than other mid 60's inserts so check your sets and see!
Posted by toppcat at 7:53 AM