Hey ho buccos! A little bit of serendipity has occurred between my last post and now that makes today's discussion of the 1959 Topps premium baseball pennants more widespread than planned.

The first bit of good news is that Friend o'the Archive Doug Goodman sent along scans of each of the 16 pennants. He also sent along all but one of the 1958 Felt Emblems as well so there will be a catch up thread on those soon. If anyone has a scan on the 1958 Cardinals emblem, please send it along as I can do a full visual checklist once it is in hand.

The Pennants are quite large, measuring about 15" x 5" and they were available via a paper insert in the regular baseball packs in '59: 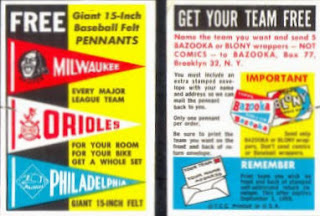 I had to nick that from Jon's Fleer Sticker blog by the way. That tear to the left of the Orioles pennant seems somewhat common; I have seen other examples with similar damage in or near that spot. Paper inserts unfortunately were not designed for a long life!

The pennants are clearly marked as a Bazooka product:

Here is the Pirates version from a Huggins & Scott auction awhile back:

I am showing this because there is another pennant set, attributed to 1968 but without any markings tying it to Bazooka. Here is what I think is a Bazooka Pirates pennant from '68:

Same exact pennant except for the wording in the black bar! Our friends in Duryea also created new artwork for the four expansion teams that were born in 1961/62:

Same look, same lack of wording in the bar at left. Some non-expansion teams had logo and style changes between 1959 and 1968 that Topps picked up on but but some did not. Compare this '59 Dodgers pennant:

Getting back to Pittsburgh, what does this mean in relation to the pennant with a 1968 Topps 3D card of Roberto Clemente discussed here back in May? Once again turning to Chris Creamer's site, we find that the Pirate logo on the '59 and (alleged) '68 pennants was discontinued after 1959 when they switched to the logo used on the oddball Clemente pennant:

Bazooka penants actually go back to the late 1940's and were a prominent premium on the 1952 Topps packs. A closer look at the historical background will happen next time out folks. Here is a 59 teaser though before we go: 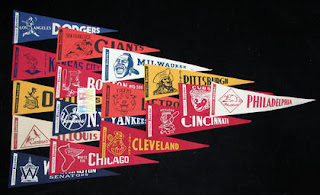 FWIW, two years later, I found this quite handy.