Back at it today kiddies, as we finish our look at Topps Salesman's Samples (for now) before your webmaster takes off for some R and R.

For the first time in four years Topps went with horizontal cards for their 1960 baseball set and also mixed it up with the sample for the last pre-expansion year: 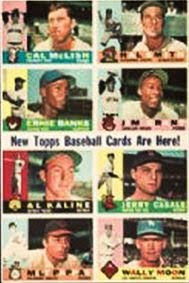 No corresponding back scan yet but as advised previously, I'll do a catch up thread with all the missing samples at some point.

1961 brought a return to the familiar:

Not only do the 61's look great, they celebrate the year of you blogmaster's birth!

Whitey Ford and Ken Boyer make an appearance as the representatives of the Stamp inserts on the reverse and presaging his assault on the record book, we get a Maris back perhaps in homage to his 1960 AL MVP award. I am not sure if other players are shown on different stamps on other samples nor if the small Magic Rub Off set was shown later on down the line and further investigation is in order:

1962 shows clear signs of the expansion era with a capless Gil Hodges (went to the Mets from the Dodgers) and a logoless Minnie Minoso (joined the Cardinals for a brief stint after playing for the Pale Hose the year before):

More stamps, albeit trimmed, on the back, plus the incredible Mr. Maris again. Jim O'Toole and Jim Gentile seem like odd choices for representing the stamp insert in '62 but both had big years in 1961, especially Gentile:

Stan the man adorns the reverse but oddly there is no mention of the Peel Off inserts in 1963:

The immortal Stan Williams gets card back honors for some reason.

Sorry for the '64 scans, my graphics-editing skills are minimal:

The reverse is weird as we get some generic coins up top just when Topps should be moving toward realism. Still, you get a Mantle back and a mention of the coin inserts:

The reverse gets a little colorful and shows an Embossed insert. I can't make out who it is but then again, you can;t make out who's who on the insert either!

1966 would be the start of the Duryea era. Koufax and Mossi are really the yin and yang of 60's pitchers, aren't they?

Things are getting real interesting on the reverse in '66. With a color shoot of a Koufax decal insert:

The '66 pack graphic is also given prominence in the first year where penny packs were not available. Check it out: 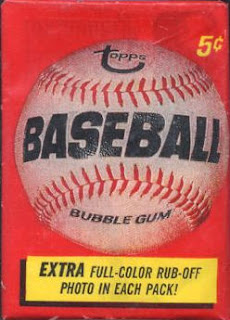 Topps ended the traditional salesman's sample strips in 1967 but I don't have scans yet, sorry!

Once again thanks to Anthony Nex for the scans; any technical difficulties are of my own doing not his. Off to Florida for some sun and surf - see you all in a couple of weeks!
Posted by toppcat at 8:42 AM