Just a little detour before we get to the 60's Topps Salesman's Samples as intrepid reader Brad sent along a couple of righteous scans regarding Bowman's sales tools prior to 1954.

First up is an old auction catalog scan of an 8 card 1950 Bowman panel with an accompanying letter used by its salesmen. While the backs cannot be discerned, I would suspect the panel is cut from a production sheet and does not display any sales copy for reasons I will get into below: 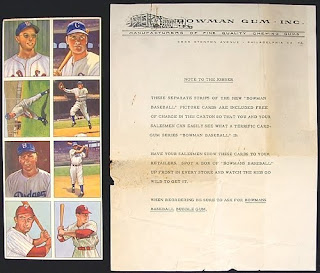 The letter is addressed to the jobbers who acted as middlemen in the sales chain. The panel consists of:

The layout suggests a 36 card sheet arrayed 9 x 4 and I believe that is how Bowman printed these almost square cards, although as part of a larger sheet.

The street address was 4865 Stenton Avenue. It's pretty much abandoned now: 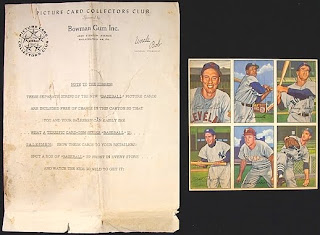 The letter has added the "Uncle Bob" tagline and includes the famous 5 star Bowman logo-nice! Uncle Bob was their Berry Crocker but he looked like Fred Mertz and made some appearances in a Bowman Collectors Newsletter that, while ahead of its time, was quite, shall we say, whitebread. I'll round a few newsletter scans up one of these days. I am aware of two issues but the 1952 connection is a couple of years past when I thought they issued the publication so they may have based an ad campaign around ol' Bob.

The cards on the panel are:

Not a bad selection-four hall-of-famers and two others who were pretty close.

Once again Bowman used a 9x4 array for 36 card sheets (perhaps as many as three of the 36 card sheets would have been on a larger master sheet). We can surmise there were similar sales tactics used in 1951 and surely in 1953 as well. 1948 and '49? We'll see what turns up.

Since Bowman is officially part of Topps, the blog, as I opined recently, will reflect this going forward and we'll look at uncut Bowman sheets in more detail someday. We will be digging back to Gum, Inc. as well then and maybe some pre-war uncut sheets will turn up but next time out the 60's Topps Salesman's Samples will be discussed.
Posted by toppcat at 4:36 PM