This might be the first time I have posted twice in a single day but with a 3 1/2 day weekend upon us and Mrs. Archives still being at work, I have a little extra time on my hands. We are due for about four straight days of glorious weather to celebrate the Fourth of July, so I figure I'll post 'em if I got 'em!

As you no doubt will have noted by now, the header for this blog is a 4 card strip of uncut 1953 Topps baseball cards, which came from a significant find of uncut strips that had been discarded as printer's scrap but somehow spared the rubbish bin in 1953, only to resurface 30 years later as an old print shop's storage room was being cleared out. I snagged the strip you see above once it hit the shelves around 1983 at Bob Sevchuk's old shop in Hicksville, NY which also served as the walk-in surgical theater for the infamous "Gretzky" PSA 8 T206 Honus Wagner card.

Over the years I have accumulated a few other strips and am on the lookout for more and thought it would be fun to show some.

The card that would have been to the right of #79 Wyrostek (or left of him if looking at the obverse) was none other than Mickey Mantle. I believe the Mantle ended up on a two card panel with Jim Hegan to his obverse left but can't swear to it. The Hegan card was on the upper left corner border of the uncut half sheet though.

Next is a 4 card panel from the 1957 Topps uncut sheet find that is heavily water damaged and typical of the condition most of the sheets were found in: 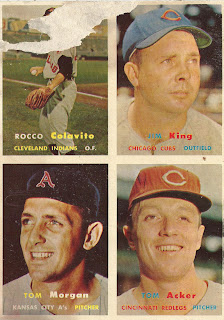 Where did Tom Acker get that cap-Woolworth's??!! The reverse shows similar damage: 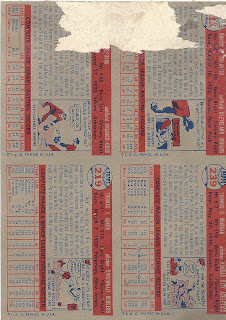 I have already shown a paper 4 card panel from 1967 so will not rehash that here and instead move on to 1970:

This 3 card panel has a finished reverse but sometimes they do not. 3 card panels are seen fairly often and have been in the hobby for a long time; well before Topps started auctioning their treasures. Letr's get vertical for effect:

Next up is a hand-trimmed 6 card panel from 1972. Hand trimmed strips and panels do not seem to be as common as factory or machine cut ones.

The reverse is finished on this one too:

Next up is 1975, the last year Topps really put some color into things after a couple of lackluster years:

The reverse on this one is unfinished though:

I'll finish up with a 1972/73 hockey strip, also with an unfinished back. It had some print issues which I have corrected with my photo editor so caveat emptor!

The 3 card format is very pleasing to the eye but since Topps worked in a universe of 11 card rows, I am not certain why they are so common. Even their salesman samples (stay tuned) were generally 3 card strips, albeit with promotional information on the reverses and I suspect primarily from the first series of cards issued each year. Were the majority of 3 card strips created by Topps for some reason or do they represent pieces of uncut sheets that were sliced and diced after the fact? What happened to the 2 card panels that would have been left over as orphans from each row?

We'll attempt to find out but right now I have to go make some hamburgers!
Posted by toppcat at 3:26 PM