Back in February I posted on the 1958 Felt Emblems Insert card that came inside the nickel baseball packs and also discussed an antecedent from 1956 . At the time I did not have a scan handy of either emblem proper but intrepid reader Shane has come through with one depicting the Cardinals from '56: 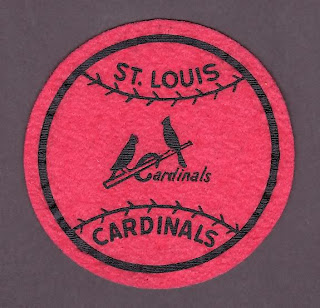 These are often called Bazooka Joe emblems as they were advertised as premiums on Bazooka comics. While these are considered to be from '56, dates around that are also possible. It may be easier to think of them as pre-1958 MLB West Coast expansion era premiums.

Beware of newer, albeit legit, retro Topps emblems that were produced around 2007. The latter version will have a TM indicator following the team name: 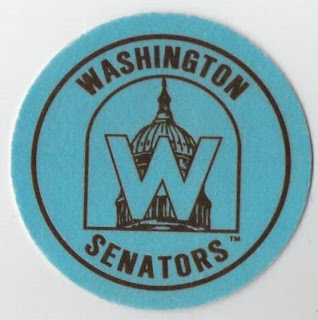 I am not up on the Heritage inserts but it looks like Topps commemorated the 1958 style Heritage cards with a reprint of the 1956 emblems and not the 58's. These were box topper "instant" premiums and came in an envelope reminiscent of the ones used to mail the originals: 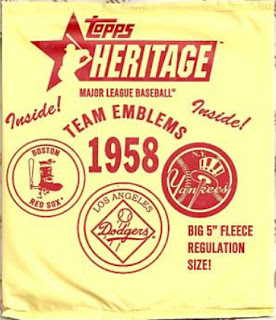 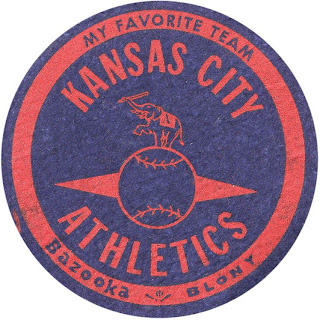 I had to lift that from the Old Cardboard website (sorry Lyman and Brett!). Both versions of the original felt (fleece?) emblems are about five inches in diameter. Only two colors are used on these as well one of which is sometimes white. Sixteen teams were issued each year; I would love to find some scans of the Brooklyn Dodgers and New York Giants from '56 but these do not pop up all that often.

The year of issue is usually ascribed to 1958 but like the earlier version, they may have spanned a couple more seasons.

There is another mid 50's emblem issue that is not a Topps product and apparently came from inside Post cereal boxes. You can see the difference clearly as they are stickers and not felts: 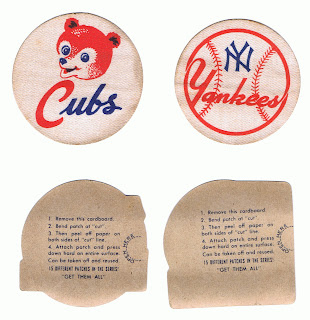 I do not know why one team is missing from the offer. My guess as to issue date on these is 1958-60. (UPDATE 7/25/10: They are from 1955, per Fleerfan's comments. He has blogged on them here. It turns out the Athletics are the missing team. They were moving to KC from Philly in '55 so maybe the logo was unavailable.)

Any additional details on the cereal box inserts or Topps emblems would be appreciated. I'll be taking a look at the larger Topps and Bazooka pennant premiums next time out, which are wider ranging by far than the circular emblems.
Posted by toppcat at 8:40 AM

Being a Topps Heritage afficionado, i can say that the 2007 felts were a box topper present in every hobby box. the backs state there are 16 available, but three were never made for some reason (cleveland, detroit, and milwaukee braves). i have a complete set that i'll try to get scanned in for comparison.

As I published on Fleerfan's site I would venture to guess that political correctness is the reason for the omission of Cleveland and Milwaukee. I love both emblems and its a shame to omit them.