Well Larry Serota, one of the two kings of the 1967 Punchouts (the other is Al Richter) has just posted his final tally of lineups over at Net54baseball.com. After tracking down the final two lineups (turns out they belonged to Team Captains Elston Howard and Willie Mays, making both four lineup men) the final count looks like this:

As predicted here, there and elsewhere, the total of 198 brings finality with 14 Team Captains known with a single lineup, 40 with two, 24 with three and 8 with four. 86 players are in the set and with the four pose variations there are 90 poses in all. As Larry states, 66 groups of three smooths out the math as lineups are particular to the groups of players in each triad (the connected panels as sold in the ten cent "long" packs).

Amidst all this carefully executed perfection though lurks the single lineup question. Namely, if you eliminate the four 66'ers (players who changed leagues and were pulled after only captaining one lineup) there are still ten single lineup players. Eight of these would likely have been replaced by turning a three lineup player into a four lineup-er and I suspect two captains went from two to three lineups as replacements were filled in a second print run as the skewing from 1 through 4 is extreme even for Topps.

In a perfect world, the distribution of captains would probably have been with either 2 or 3 lineups. The interaction of pulled players' lineups must have impacted this though, as it seems there would have been 44 two lineup captains and 22 three lineup captains if everything had gone according to plan (if two players went from 2 to 3 lineups the count of those would have been 22). In a set where rules of three rule, that makes (almost) perfect sense.

Here's shot of Luis Aparicio, one of the four lineup players, Captain of Captains! 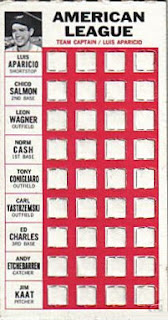