I have posted sporadically on the 1949 Topps Golden Coins and various permutations thereof but while getting into some deep research on the Shorin family I found an intriguing reference to an obscure board game that has a connection to Topps and this set, one of the first issued by Topps, albeit in conjunction with It Happened To A President.

The 1953 Catalog of Copyright Entries lists two entries for Joseph Shorin, the President of Topps at the time, for Meet The Presidents, which turned out to be a Selchow & Righter game (think Scrabble, Trivial Pursuit) that, much to my delight turned out to feature a set of presidential coins as integral pieces. In addition to Joseph Shorin, who was listed individually, Marion E. Stringer also held a copyright (along with Joseph) and Selchow & Righter for the game rules. It would appear that the individual entry for Mr. Shorin was for the coins used in the game, which are based upon the Golden Coins. Ms. Stringer apparently liked to design board games, as she was involved with another game called Assembly Line.

Here are the two side-by-side, the game piece on the left (made of aluminum) and a Golden Coin on the right (made of brass) that was probably a gas station premium.

The metal Golden Coin measure exactly 1" in diameter, while the aluminum game piece is larger at 1 3/32". This would seem to mimic the original plastic coins, described as 1 1/8" in diameter. The arc of the coin design from plastic gum insert to metalized component of something larger sold off a shelf follows that of Play Coins of The World, also an original 1949 Topps issue.

The backs are identical as well: 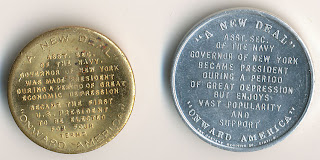 We get a clue as well from the game coin: It was produced by The Osborne Register Co. of Cincinnati, a firm that was founded in 1835 and exists to this day as a private mint (very handy for a company like Topps). I would think Osborne was involved in producing the metal Play Coins and the Lucky Penny Bazooka premiums from 1957-58 at a minimum.

The game itself is a letdown. Here is the original, 1953 cover and some contents: 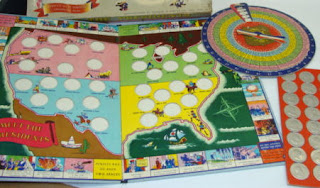 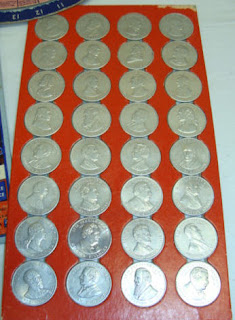 That holder contains 32 pieces but there is a 33rd (Grover Cleveland has fouled up the Presidential count for many years now, hasn't he?). Reissues from 1961: 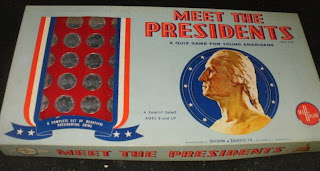 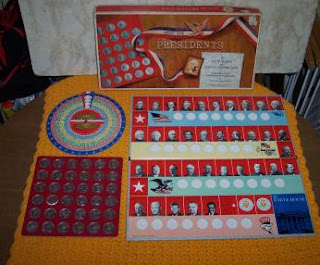 gave us redesigned covers (and game boards) and also 35 and 36 coins respectively. I have to think there was a game with 34 pieces in there too. These are a neat little piece of Topps history!
Posted by toppcat at 12:01 PM

Wow! I had this game (1961 version) as a kid. After playing it in our classroom one day when recess was rained out, I told my parents I wanted it for Christmas.

When I was a kid I think we had the remains of either the 61 version or 65 version. I seem to recall a board similar to the 65 pic shown there. The reason I say remains is I don't recall seeing it complete for very long if at all.