I thought it would be fun today to take a look at the three high number double prints Topps sold to the youth of America in the late summer of 1952. It's not well know but in addition to the oft-documented left pointing or right pointing stitching on the "baseballs" containing the card number on the backs, there are differences on the fronts of these as well.

First things first though. The stitches on the baseballs point left and right on other cards in the set. I have no idea if this varies from player to player (i.e. if any other players can be found with the stitches going both directions) and frankly don't have the stamina to find out! The one exception to this is #20, Billy Loes, whose stitches are rotated 90 degrees for some reason and appear side-to-side:

Let's take a look at our three high number double prints, #311 Mantle, #312 Robinson and #313 Thomson, with left pointing stitches shown first in each instance (different resolutions on each, so don't read too much into line thickness):

The fronts though, show signs of not being exact duplicates of each other. Here is the Mick on a card where the stitches face left: 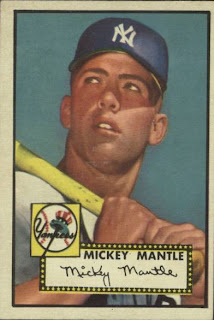 Take a look below the autograph plate (under the row of stars)as there is a distinct yellow line showing. The high numbers were thrown together so quickly that compositional errors arose that were not corrected. Here is a close-up: 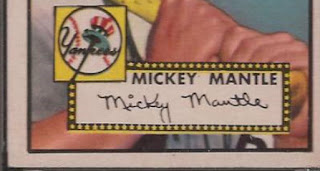 The yellow line looks straight put the plate and logo were masked or pasted a little crooked! Speaking of crooked, take a look at the autograph plate on the Mantle with right pointing stitches: 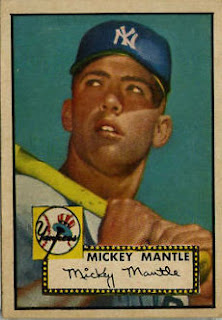 The yellow line is gone but the cut on top of the upper row of stars is really crooked: 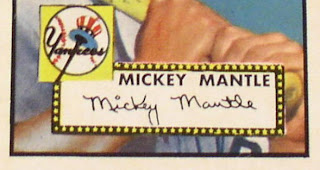 Also, the top black frame line of the card has extra "wings" left and right of the intersections with the side frame lines:

Sy Berger has confessed the high numbers were practically slapped together at the last minute and the evidence on the Mantle's certainly supports his statement.

Next in line is #312, Jackie Robinson. The obverse differences are much harder to discern on his two flavors of cards but they do exist. Here is a look at Jackie's card with left pointing stitches: 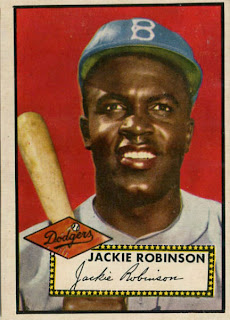 I trimmed the top a little close so you can see just how skewed the autograph plate looks. A closer look reveals a green line under the left two-thirds or so of the bottom row of stars and quite a bit of yellow off the right border of the stars: 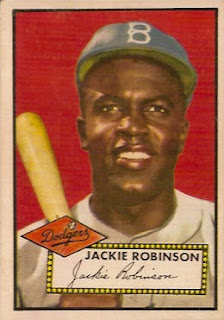 But the name plate is a lot cleaner, albeit still crooked, without all the extraneous color under and to the side:

Next we have the Staten Island Scot, #313 Bobby Thomson. His left stitch card is thus: 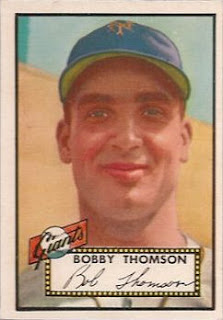 He looks happy, no? Well having hit the shot heard around the world would do such a thing but I believe all of the 1952 Topps cards featured photos from 1951, so he had yet to hit the legendary homer. The easiest way to tell from the obverse that this is a left stiched card is to look at his left eyelid,as facing the card, right in the fold on the left, which should be blemish free:

His right pointing stitched card tells a different story though: 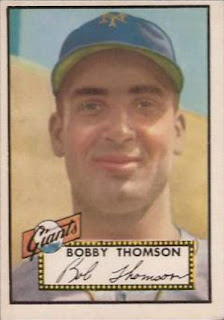 Close up you can see two little white dots, which are either a blemish on his eyelid or a compositional defect:

Not to pick on Bobby but here is an even more extreme closeup:

This is all just an exercise in observation as the back of the card has such an obvious variation in each instance but it shows part of the production process in 1952 and reveals just how madcap the rush was to get out the '52 highs.
Posted by toppcat at 10:43 AM