You Drive Me Ape, You Big Gorilla

While I never really have my scans and notes together at the right time to do too many topical posts, today I am breaking with that scattershot approach to take another look at the fairly amazing 1967 Topps Blockheads.

As noted previously, these were a series of a dozen Hallowe'en masks that were more like hats, with a couple of slits to allow the wearer to see the outside world.  The story is that the slits were too small to be safe and the issue was pulled.  I have never been able to verify that but it does make some sense.  There could also have been a public outcry against some of the designs, which in the typical Topps fashion of the time, celebrated certain vices a bit too boisterously for some folks.

Five of the masks popped up on Ebay recently and are worth a second look. There were at least three of one of them, #11 The Ape, all of which were missing one eye-slit punchout and were described as prone to such Cyclopean behavior.  The Ape is actually too big ( 14 7/16" x 8 3/4") to fit my scanner but I have nailed the Ebay scan to show what it looks like: 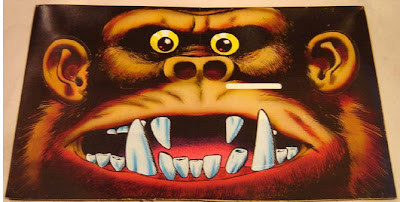 These are scarce but it turns out I overpaid as a group of four popped up afterwards from a different seller and went for a song (note to self, do not cancel eBay search after winning bid): 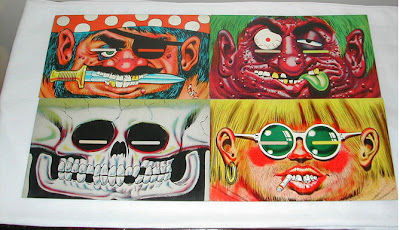 Clockwise from top left, those are:

Between the knife clenched in the Pirate's teeth and the cigarette dangling from the Hippie's lips, there was enough to make a lot of parents peeved. Did this kill the set?

The backs are really great and show the level of detail that Woody Gelman was driving for: 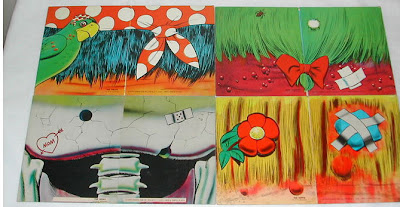 The bandaids are a nice touch! I suspect those four examples were all from a single box, which would have held eight loose Blockheads, unwrapped and without gum for 15 cents apiece.  Chris Benjamin's Price Guide to the Non-Sports Cards No. 4, has a picture of the retail box:

The set, as I have written before, was repurposed into an issue called 3D Monster Posters. Benjamin also shows that retail box in his guide:

As very little is known about that set, I have to think they were just the same ol' Blockheads, renamed, based upon the box cover artwork and lower price point.  1968 would be the logical date of issue for the "posters". The fact all 12 poses were reiussed and no variations are known, would seem to support more of a poor sales scenario than a parents protest being responsible for the scarcity of these today.

Topps issued Hallowe'en and Monster themed sets from 1959 through about 1971 on an annual basis, although some sets were reissued from year to year, probably to sell off overstock. A similar run of Valentine's Day products coincided with these dates as well.  A lot of things changed at Topps after 1971 and they may not have issued similarly-themed Hallowe'en sets again until the reintroduction of Monster Initials in 1974.
Posted by toppcat at 8:56 AM