I ran across a scan of a pretty rare insert today, the 1959 Topps Elect Your Favorite Rookie, which was made of paper and inserted in packs touting the rookie team contest Topps used to hold annually.  The inserts are quite hard to find so scans are not easy to come by but the thing that caught my eye was the little rip at the top (or side, depending upon orientation): 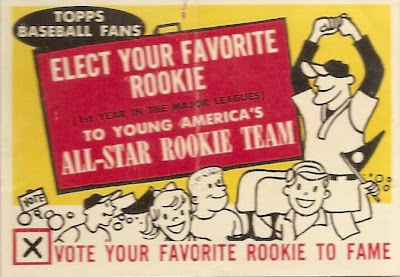 You can see it just left of the fold.  It is exactly the same as the little rip on the 50's and 60's tatoo packs that I have long suspected were produced on the original Topps gum wrapping machine, first used by then in 1938 to wrap Topps Gum but likely decades older by the time it was put to use by the Shorin's.  You can see it a little better on the other side of the insert: 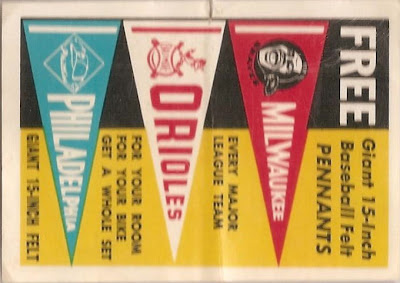 Bob Lemke has another scan of different one (an actual ballot) at his wonderful blog, take a look here.

Topps must have cut these on the same machine that they used for packaging the various tattoo and gum tab issues.  The rip is a byproduct of this process, most likely from the cutting stage, where I suspect a small pin held down the insert (or tattoo or gum wrapper) which would have been unspooling from a large roll while a cut was made and then the just-cut paper was dragged across the pin, leaving the rip as it moved on to the next phase of production.

While the insert contest and premium cards of the era probably were printed on and cut from the same size sheets used for the regular issues they were packaged with, this implies another process and possibly another location as I have a reasonable level of confidence this ancient machine resided on the first Topps production floor at 60 Broadway, Brooklyn and never left until it was decommissioned in the late 1960's.  When developers converted 60 Broadway to condos a few years ago, I wonder if they had to clear this old behemoth out? Old office furniture was found in the basement of another old Topps space at 134 Broadway during a similar conversion, so anything is possible!
Posted by toppcat at 6:55 PM