In faithfully writing this blog twice weekly for the last three-and-a-half years, I have tried to put aside what is often referred to as Conventional Hobby Wisdom (CHW) and take a fresh look at the facts surrounding the myriad permutations of the Topps Universe. A while back I started dissecting the various 1951 Baseball Candy issues and explored the possible print runs of the five subsets in that grouping.  At the time I had thought there were three separate printing of the Red Backs, based upon how the two variation cards in the set interacted with some very specific big league transactions. Alas, my contribution to the CHW seems to have been wrong.

These two transactions involved Gus Zernial and Tommy Holmes.  Both were above average players but certainly would not be considered stars of the game in 1951.  Zernial was sent to the Philadelphia Athletics by the Chicago White Sox via the Cleveland Indians in three-way deal on April 30th, 1951. He has two Red Back cards: one with the Chicago logo and one that is merely blank as the logo has airbrushed out.  It is clear that the Chicago version came first.

Tommy Holmes was talked into managing the Boston Braves Class A affiliate in Hartford Connecticut near the end of spring training, on March 20th and departed the Braves for the Chiefs soon thereafter.  On June 19th, with attendance faltering and the Braves floundering, their manager Billy Southworth got the ax and Holmes, a fan favorite, came back to the bigs as manager and occasional player in an attempt to put some fannies in the seats and wins in the books. It didn't work and Holmes was riding the pine in Brooklyn the next year while the Braves would linger that season before moving to Milwaukee.

Here is Holmes on His Hartford card; only the text was changed, they even kept his cap with the Boston logo. This could mean they didn't airbrush it away because he returned to Boston before the second  run of Red Backs was printed but that assumes there was an orderly process occurring at Topps HQ and that is something that was probably not happening in the crazy early days. 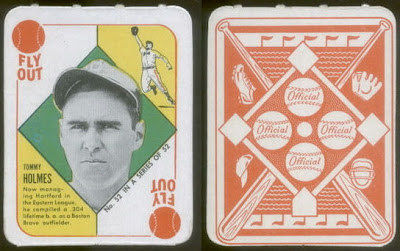 Back in Brooklyn, Topps used two types of cardboard for the Red Backs in 1951-a creamish looking one that tends to get quite dingy as time passes and a brilliant white one that retains its brightness to this day.  The thought I had at the time was that the Boston version of the Holmes card had been issued after June 19th but think now it came first.  Indeed, Bob Lemke pointed this out in a December 1986 Baseball Cards magazine article.  Bob's CHW is aging quite gracefully by the way.

My reasoning was based on the following permutations of variations:


I still have to sort out some backs on the Connie Mack All Stars and Team Cards in 1951 but want to to do a bit more research on them before posting.  I've always said this blog represents my thought processes on the early days of Topps and I just proved it!
Posted by toppcat at 5:47 PM