Land of the Giants

Generally speaking, the teams I root for cause me great disappointment most of the time.  I follow the Knicks in basketball (ugh),although with the Nets coming back to Brooklyn I may double down as I almost always go as local as possible here on Long Island.  That of course means I am an Islanders fan as well, which was quite a lot of fun for their first fifteen years, not so much since. In baseball it's the Mets, which I don't even want to get into, it's such a sad situation.

But in football, it's the Giants and has been since I was in third grade and used to go to their summer training camp at C.W. Post University and chase the players for autographs.  Oh, it could have been the Jets and I flirted with them a bit over the years but Big Blue is my football team and without them my sports fan experience would pretty much be the most depressing collection of teams this side of the Continental Football League.

In 1956 they would also celebrate after winning the NFL Championship, with this talented bunch of players: 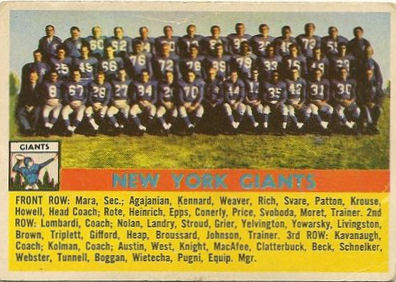 Two decades earlier Ed Danowksi was the only Giants quarterback until last night to win two championships for the team, although Phil Simms certainly deserves a mention, despite a season ending injury near the end of the 1990 season. Danowksi even gets a nod on the back of the card: 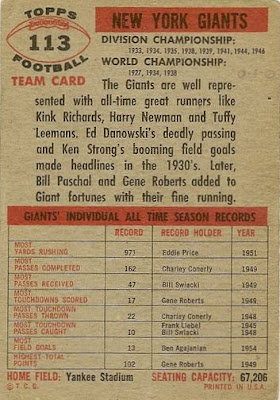 After winning in 1956, it would be 30 more years before they added another title but they have accumulated some hardware since then!

Strictly speaking that's a picture of the 55 Giants, as Tom Landry is still in uniform. Also, the Mara in the picture is Wellington.