If you haven't noticed, we're pretty much living in the late 40's and early 50's lately here at the Topps Archives. I find the pre-standard sized era to be one of the two most interesting of all (the other is the '66-74 time frame) in their history as Topps was just slinging out product in the early days to see what would stick.

One of the thing they did to compete with Bowman and other confectionery companies that issued cards was just ramp up their card size in a hurry, starting in early 1950.  Early on they just adapted a couple of sets and made the cards bigger without really altering the artwork much, although as more real estate was added more text started to show up. Topps also went from one cent gum tabs to an additional rice point by using panelized versions of their cards.

In 1948-49 this necessitated six card panels of their tab sized cards but once they upped the dimensions, they went to a two card panel,.  This configuration was used with three different sizes from 1950-52 and then was supplanted by the Giant Size cards even though a couple of sets lingered in the smaller format (without being issued in panels) until the mid 50's. One of the firsts sets issued both as singles and two card panels was License Plates, which followed Flags of the World - Parade.

Both packs and wrappers for License Plates (marketed as Auto Magic it seems, in deference to the scratch off feature on the reverse) are scarce.  Here is the one cent pack, from a picture I found in Non Sports Archive Wax Pack Wrappers from the 20th Century by Adam Tucker and Marc Simon: 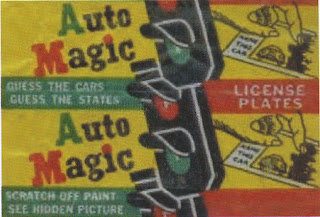 Inside were a number of panels, probably three, that looked like so:

The backs looked quite odd coming from the nickel pack and there was a lot of coating to scratch through to get to the quiz answer::