In early 1950, hot on the heels of one of their very last gum tab issues ('49 Flags of all Nations), Topps issued Flags of the World, other wise known as Parade. Abandoning the tiny tab cards which measured 7/8" x 1 7/16" for a new, albeit temporarily sized cards that came in at a relatively whopping 1 3/4" x 2 7/8" Topps was better able to compete with Bowman Gum, their primary competitor.

The front was referred to in trade advertising as "silk" by Topps.  You can see the texture but it's not silk.  The reverse (or was it the front) featured everbody's second favorite General:

The condition is typical-those penny gum tabs were brutal on the cards! Topps reused the artwork for the larger reissue and added a very blah-looking gray background: 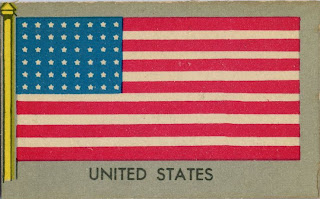 The backs are even more blah: 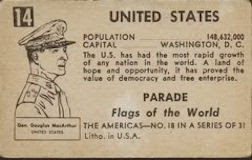 That last scan is cribbed from the Network 54 Vintage Non Sports Forum Gallery, the rest are nabbed from eBay as my scanner is inaccessible tonight.  You can see how the artwork on the reverse was taken from the earlier version as well.  Topps then added a couple of facts and some text and had themselves a new set!

The only other set Topps did this with was their License Plate issues of 1949 and '50, although World Coins also saw reissue (but not resizing). After these two sets, Topps went to yet another card size as their race with Bowman to see whose was bigger continued its frenetic pace.

I'll be back next time with a look at some of the five cent packaging for the 1950 set.
Posted by toppcat at 8:02 PM