Yonks ago, when I was sussing out the vagaries of the 1970 Topps Teamates (a.k.a. Grow Power), an internal set produced in house to foster camaraderie among employees at Bush Terminal, I thought I had spied Woody Gelman in an art department card but it turned out I was wrong.  However, thanks to the current REA auction, Woody has been found, along with 17/18ths of the full set: 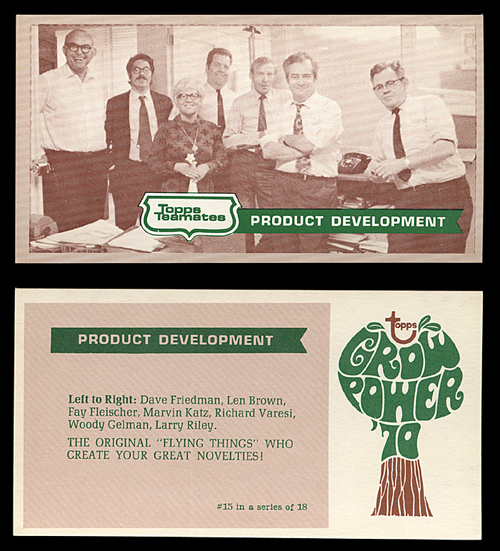 That is Woody, second from the right and before a series of strokes would affect him a few years later.  Len Brown, who was a Topps employee since 1959 and who would succeed Woody, sort of, is also shown, second from left.  We also get a look at  Fay Fleischer, the group's secretary who guarded Woody Gelman's famous bank of file cabinets (a wellspring from which Many rare Topps issues and oddities sprung).

I can also report there is no sign of the Shorin family present in the set; upper management did not need any grow power I guess!

I will present a visual checklist of the set before the month is out as I want to try and sort out the numbering first  Besides, I think the spotlight should sometimes just fall on Woody......