We've covered a few moves and mailing addresses for Topps here over the years but today's entry in the Where Are They Now? category goes back to one of their first.


Topps moved to Bush Terminal in June of 1946 and primarily held two addresses there.  The first was 237-37th Street and then in the mid 1950's that began to be supplanted by 254-36th St, when Topps started to expand after the Bowman acquisition.  These were portions of two large buildings at Bush Terminal that had  a central alleyway running between them. 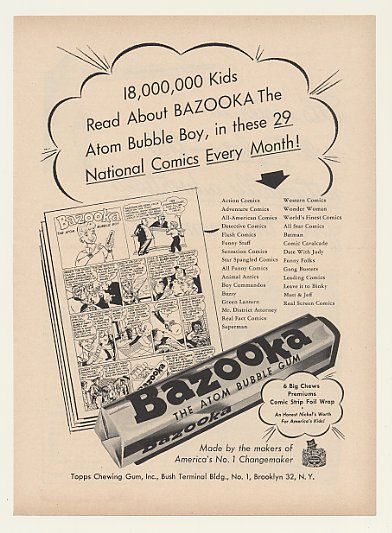 It turns out that Building No. 1 at the sprawling industrial complex in Sunset Park, Brooklyn belonged to the 237-37th St. location. This is the only alternate look to that address I have ever seen, from a November 1948 ad that also (and quite helpfully, I might add) lists the 29 National (DC) Comics ads for Bazooka would appear in and it highlights the old (Topps "Changemakers" penny gum tabs) and the new (Bazooka).

The idea of a comic book named "Mr. District Attorney" is quite amusing, no?
Posted by toppcat at 6:32 PM