A series of posts here a while on the 1948/49 Magic Photos provided a glimpse not only at the cards and packaging of this landmark early Topps set but also the albums that could be ordered to house the cards.  Prior to the introduction of clear sheeting in the mid 1970's, hobby supplies usually consisted of some sort of thick papered album and the use of slitted corners or, less elegantly, postage stamp corners. To house the two, 126 card series of Magic Photos, Topps created two very similar albums.  I'll direct you here for the cover shot and some background materail as I am on about the interior checklist pages today.

The first series checklist, shown in blurry fashion previously, can be seen better in this scan, recently purloined from eBay: 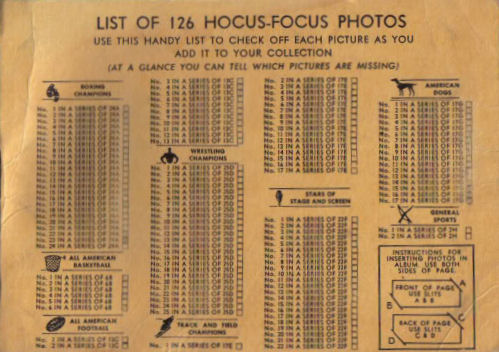 While both album covers are the same, as is this page (the first thing seen when opening the album) in both editions, Topps added a checklist to the back of the album for the second series.  I've included a bit of the back cover, so you can see: 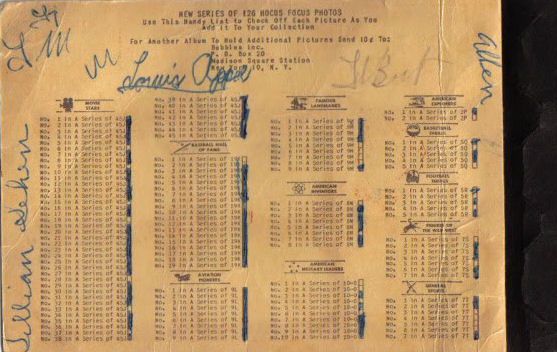 I am not certain what appears on the back page of the first series album-anyone out there in Archives-land have an idea?  I like the ad to sell another album by the way.  Our wee consumer back in '49 was making some very good progress on the set!
Posted by toppcat at 7:21 AM