I was doing a little research on the Topps Hocus Focus cards this week and think I have finally managed to figure out their year of issue.  Almost every hobby reference or article I have ever seen refers to the smaller of the two sizes issued as a 1955 and the larger (smaller and larger being relative terms) as a 1956.  Based upon the player selection in the Baseball Stars subsets (23 cards in the small version, 18 in the large) it is obvious both came out in 1955.

Each Baseball Stars subset includes at least one player form each major league time at the time.  In addition, two players printed in both sizes had team changes and these really help to pinpoint the year.  Ed Lopat started the year pitching for the New York Yankees but was traded to Baltimore on July 30, 1955.  He would end his career for the Orioles, who released him on October 10th.  He is shown in both sets as a Yankee: 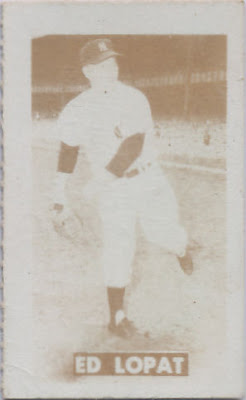 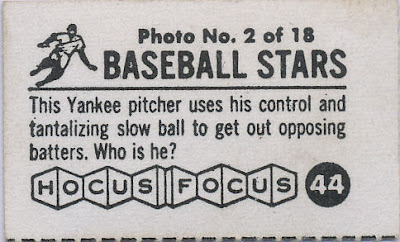 Boston and Kansas City were the only two teams with two players in the "large" set, so Lopat was the only Bronx Bomber present.  He dates the set at 1955, as does the inclusion of Johnny Schmitz: 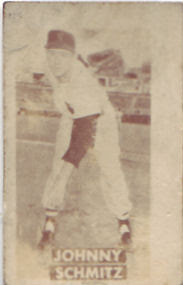 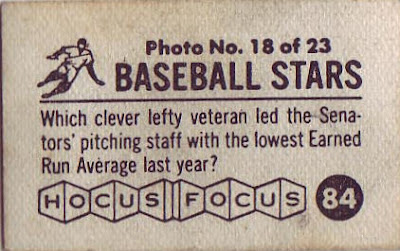 Johnny is clearly a Senator in the "small" set but Washington traded him to Boston after the 1955 season. In addition, he indeed led the Senators staff with a 2.91 ERA in 1954. Based on Lopat and Schmitz, I am dating both Hocus Focus sets as 1955 issues.

The other thing I am learning is that the first 96 cards in each set are identical, except for size and subset numbering.  All 96 seem to share the same photo, text and card number, although not all small cards are confirmed yet.

Nice detective work on this set! 1955-56 is also the period when Topps stood in pitched competition with Bowman for card customers.

Before it ended with Topps' purchase of Bowman's assets prior to opening day 1956, I think their business and design teams worked overtime trying to convince kids Topps would give them more at the candy store. They put a bunch of work into extra sets for 1954 (Scoop), 1955 (Doubleheaders), and 1956 (Hocus Pocus/Pins), but this stream of extra baseball work dropped to a trickle after 1956, with Bowman no longer a competitor.

Hocus Focus strikes me as Topps' fallback, a revival of late 40s Magic Photos technology that enabled them to cheaply provide photo-like baseball cards. It also makes sense to me that both came out in 1955, given the smaller companion sets (210-card "main" and 66-card Doubleheaders).

1956, on the other hand, boasted a 300+ card main set and costly-to-make pin backs. Adding a second run of spit-and-wave photos to that workload seems excessive, especially compared to the quality of the color-based cards.