The 1954 Topps Scoop set, a semi-classic of the mid 50's, contains 156 cards depicting famous, infamous and just plain newsworthy events spanning 3,137 years of civilization and relying upon two gimmicks. I'll not discuss the front scratch off gimmick here, odd as it is, nor the faux headline and news article gimmick concocted by Topps on the backs.  No, I want to take a look at two closely related cards from this set instead.

Card no. 66 shows an impressive feat: 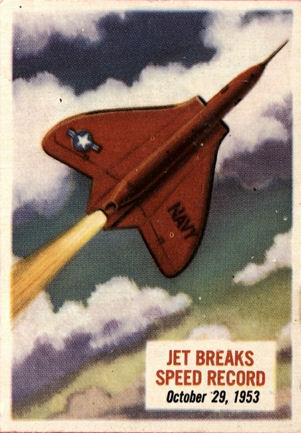 This in itself was news but what caught my attention was that Topps also commemorated the new record on card no. 139: 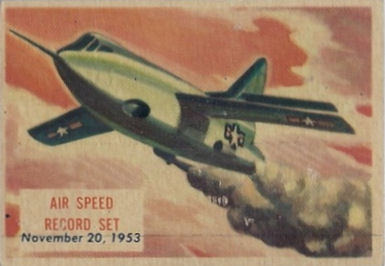 Why does this intrigue me?  Well, besides having two cards with the same news subject in a single set, the first record was captured in the first series of 78 cards and the more current one was memorialized in the second series  That pretty much puts production of the first series between October 29 and November 20, or maybe a little bit after.  The set is always described as being from 1954 and I would tend to agree but there is the distinct possibility series 1 came out in 1953 and series 2 in '54.
Posted by toppcat at 5:11 PM