In 1950 Topps released the first series of a set called Freedom's War and it was a big hit. An additional series followed and if it wasn't for some high profile protests in the spring of 1951, at least one more series after that would have been issued.  The saga of this set is a story for another day as it has so many anomalies and variations a detailed post or two is necessary to decode it all.

Today we are looking at tanks, specifically the M-18 Gun Motor Carriage, affectionately referred to as the"Hellcat" and which was manufactured by Buick during World War 2. Why?  Well, I'll tell you...

The first series of Freedom's War consisted of 96 cards.  These were followed by 7 special cards featuring tanks which were diecut, unlike the rest of the set. after that an additional 100 cards appeared and the set ended up with 203 cards.  That odd number has always bothered me as it does not make a whole lot of sense.

One of the tanks, #101 (our friend the "Hellcat", comes with two different colored backgrounds, one mostly orange and the other predominantly yellow.  However, if you look at these cards you will see the picture is quite different when comparing one color to the other.  Here, take a peek at the orange: 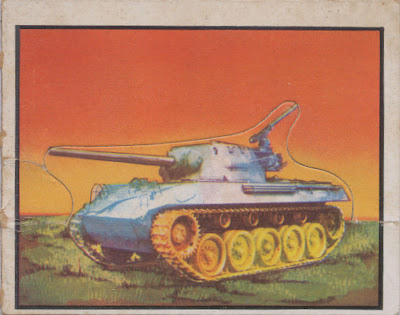 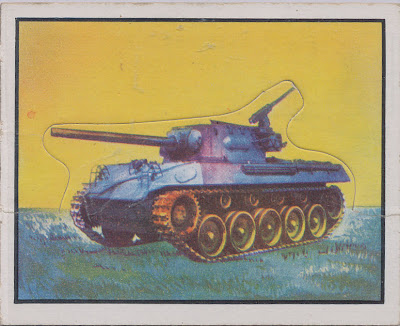 The tank is spaced differently and there is far less detail on the non-tank portions of the yellow card. There are other, more subtle differences as well if you look closely.  The back of each is identical: 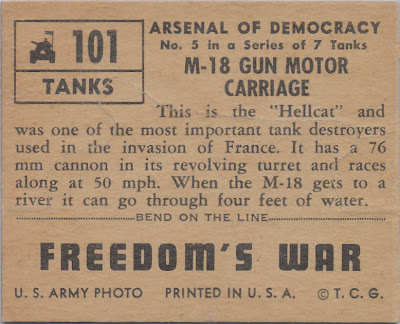 Yellow seems to be a little harder to find and there is a suggestion in the hobby literature that non diecut versions of the card, unlike the other 7 tanks, do not exist.  I have no way of confirming that at present so who knows if it's true.

So what happened?  I suspect either one of three things.  The tanks were sandwiched in between both series and appear to have missed in of the print runs as well, indicating production problems affected them.  Either someone misidentified one of the M-18's in the production process and two different looks were created for the same tank or two different teams worked on the tanks and one inadvertently was assigned the same vehicle.  Instead of fixing the error, Tops went ahead and issued two different #101's as the cards were selling hot and heavy. Alternatively, a different tank could have been intended for one of the backgrounds and for unknown reasons it had to be pulled and the just subbed in what they had with the M-18 and gussied it up a little bit. By the time they would have done a correction, they were on to the next series and probably decided to scuttle the tank series so it was never fixed.

While a master set of Freedom's War would total well over 500 cards, a complete set should total, to my mind at least, 204 cards and not 203 and both versions of #101 should be included.