Topps had a penchant for sneaking little ads and inside jokes onto their illustrated cards in the 1950's.  The better known examples include a handful of ads in the backgrounds of some 1953 baseball cards and they are usually unobtrusive but there if you look hard enough.

In 1955 though, perhaps giddy with the prospect of Bowman's imminent demise, Topps included a card in a landmark Non-Sports set, Rails & Sails that did not require much searching: 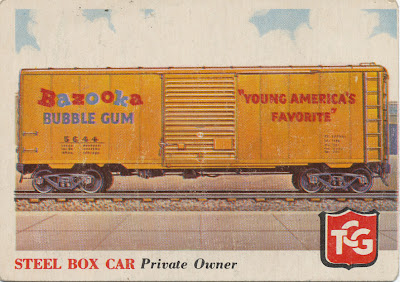 From the colorful Bazooka logo to the use of the corporate shield (and Trading Card Guild logo) to the catchphrase "Young America's Favorite" Topps really did a nice job of promotion in the midst of one of their biggest selling sets of all time.

The back of the card does not really play along and follows the factual presentation of information the set is known for: 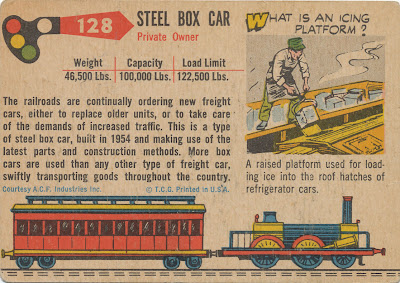 100,000 pounds of Bazooka sure is a lot of bubbles! The display of such a rail car was not farfetched either as Topps main warehouse, manufacturing plant and offices at Bush Terminal in Brooklyn were chosen in part due to access to rail links.

I am trying to figure out if the superstructure shown in the background to the immediate right of the box car behind the car was meant to show the Gowanus Expressway, which dominated the eastern view from Topps HQ and under which many a Topps executive parked his car back in the day. Whaddya think: