Topps has made all sorts of little specialty sets over the years for various players and executives.  These are often handed out at banquets or some such event where the honoree get handed a stack of their own Topps baseball cards.  One such card many people are aware of is the 1990 George H.W.Bush card that shows the former president in his Yale uniform.  That one mysteriously found its way into some regular 1990 packs and is worth a small fortune. Maybe 100 exist and I will take a good look at it someday.

Another card that was a solo effort honors Frank Cashen, architect of championship teams for the Orioles and Mets over the years. I don't know much about it other than it was handed out at when he was honored  by the New York Sports Commission as its Sportsman of the Year and that it looks like this: 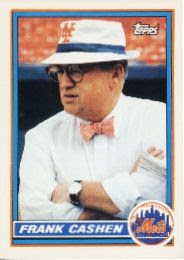 Happy hunting all you type collectors!
Posted by toppcat at 6:47 PM