Here's another look at a Topps competitor of yore....

Within a year of Warren Bowman leaving his namesake firm in the middle of 1951, the gum line there transitioned to a division of Haelan Laboratories, Inc.  That name was chosen by the new board of directors and would start appearing on Bowman cards and packaging within less than a year. Bowman eventually would prevail on  lawsuits against Topps for contract infringement with dozens, if not hundreds of baseball players and was seemingly ascendant in 1952 and '53 before getting sucked into a financial vortex primarily caused by the relentless pace of Topps and the killer instinct of the Shorin family.

By 1955 Bowman was a shell of what it once was and the gum division was sold to a local Philadelphia firm called Connelly Containers, headed by John Connelly. Their baseball wrappers that year still referenced the Haelan Laboratories name: 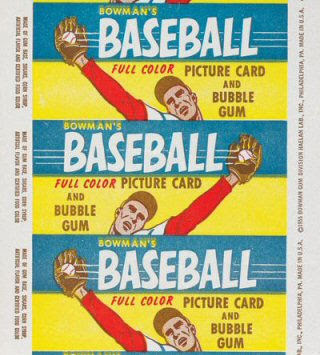 You can see the Haelan indicia running along the right side of the wrapper above.  The nickel wrapper belied Bowman's money woes as they were stuffing nine cards in a nickel pack trying to outsell Topps: Bowman whiled away the interregnum between baseball and football seasons with a clever issue called Magic Pictures.  You can see how the name had changed to Connelly Containers on the wrappers by then: 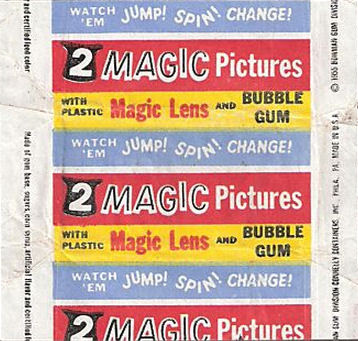 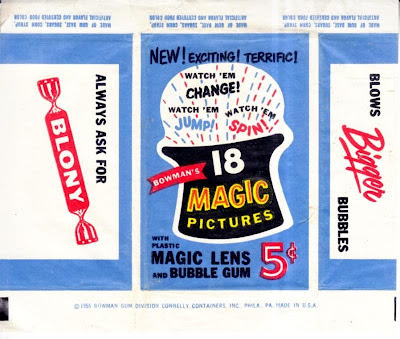 Magic Pictures may have led Topps to develop Hocus Focus in 1955 so that they had a competing "play" product in the market.

The final Bowman release of 1955 (and all time) was their football issue. It too carried the Connelly Containers credit on the wrappers: I like the "Union Made" stamp-there's probably a story as to why it was on there.

It's not on the penny pack though: 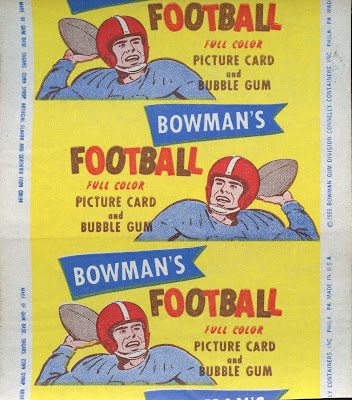 Topps did not have a football release from 1951-54 but sensing the end was near for Bowman, issued All American Football and flooded the marketplace in 1955. Their instincts were correct and in February 1956 Topps purchased Bowman from Connelly Containers for a reported $200,000.
Posted by toppcat at 6:24 PM