Well gang, I am still reeling from my close losses in the latest Legendary Auction.  I missed out on two lots, one a non-Topps lot I won't bore you with and the other a treasure trove of 1950 Topps Hopalong Cassidy cards and related ephemera.  There were two neat pieces in this lot I thought I would take a look at today.

One is a straight up promo sheet, probably part of a point of display ensemble:

The "Save 'Em Trade 'Em" motto was created along with the Hoppy set and would last into 1951, used on packaging for over half a dozen sets.  That's a great looking piece, pardner!

Also in the lot was a comic book ad advertising both the penny and nickel packs of Hoppy: 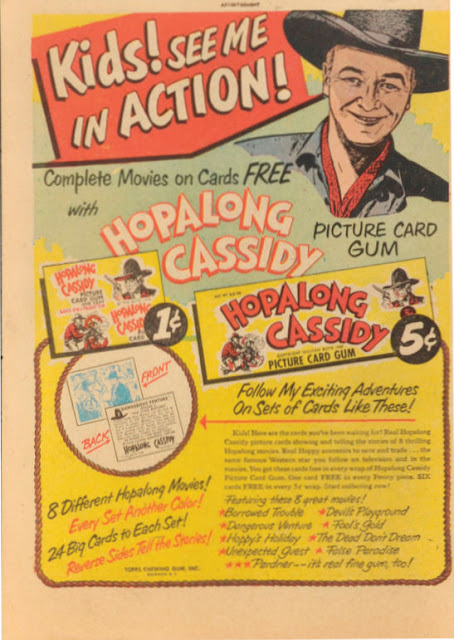 It's hard to make out but the five cent pack held six card, comprised of three 2 card panels. You can clearly see that the bubble gum was intended as the selling point, not the cards.  Topps would realize in short order they had their priorities reversed but 1950 the pink stuff was king!
Posted by toppcat at 8:08 AM