I probably should have shown this in my post on the 1959 Fleer Ted Williams set but to tell the truth, I forgot it was on my hard drive!  I am organizing all my scans these days during the final preparation of what I am calling The Modern Guide to Topps Chewing Gum: 1938-1956, which is nearing completion, so there will bursts of these hidden gems posted here. While final distribution details of this tome are still a couple months off, it will be available, for free, via download.

In the meantime, take a gander at this letter Fleer sent to hobby legend Buck Barker, detailing why #68 in their Ted Williams set was not to be found in the packs: 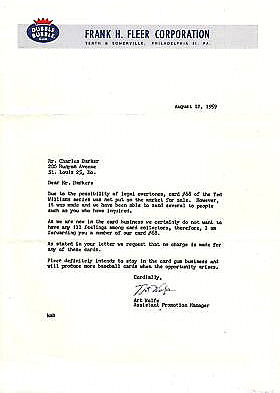 It's a little hazy but you can see that Buck was to receive multiple #68's!  That's why they're called the Fabulous Fifties folks! Here is a transcript of the letter, which was dated August 27, 1959.

Due to the possibility of legal overtones, card #68 of the Ted Williams series was not put on the market for sale.  However, it was made and we have been able to send several to people such as you who have inquired.

As we are new in the card business we certainly do not want to have any ill feelings among card collectors.  Therefore I am forwarding you a number of our card #68.

As stated in your letter we request that no charge is made for any of these cards.

Fleer definitely intends to stay in the gum card business and will produce more baseball cards when the opportunity arises.