The Glorious Result Of A Mis-Spent Ute?

Happy New Year kids!  We are roaring into 2013 with a  look back over one hundred years ago, to about 1910.  And in a bit of a twist, it's a Bowman related post today, as in J. Warren Bowman, the man, the mystery, the merry-maker.

Leon Luckey, who runs Net54Baseball.com, the web's premiere pre-war card site (there is a lot of postwar stuff there too), and is a type colelctor of the the highest order, also collect ancillary items relating to the cards.  He has an Obak sample item from about 1910 that was addressed to one J.W. Bowman in Salt Lake City and it has had me pondering for a while now whether or not the addressee was, in fact, J.Warren Bowman.  Here, take a gander: 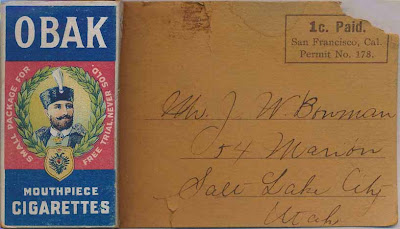 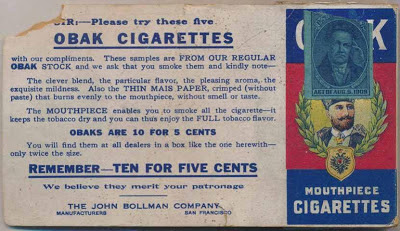 I know, I know what are the odds.  However, contemplate the fact that Warren Bowman, to use the familiar, lived in the American Southwest when he was younger and he would have been around 13 or so when Obak was sending out sample coffin nails.  Some genealogical research would be beneficial here and I poked around ancestry.com when I had a membership there last year but to no avail.  So what do you all think?  Warren or not Warren?

Not Warren as it turns out, at least not ours....