Topps tested out, at the very end of  during the 1973 baseball card production, an "all 660" configuration, where all of the 660 cards in the set could be found in a given pack.  The 73's were mostly also issued in five series, and the series-by-series process was 21 years old at that point, so this was not something done lightly.  The wax boxes with all 660 cards actually came with a "topper", a little insert from Topps explaining what was happening to the retailer whose mission in life was to assimilate everything Topps told him (or something like that).  Thanks to a post by 70sboxfanatic on collectorsuniverse.com's forum:

It seems like a no brainer now but back in '74 (the first year of true "all series" distro)  it would have required a major (and earlier) undertaking by Topps to get all the cards ready for spring training.

It's worth noting that they also did the same thing in Canada, as the OPC wrapper from eBay shows: 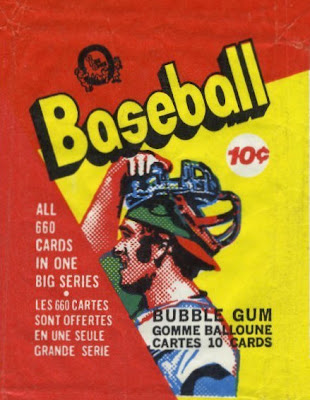