In 1968 Topps issued a new style of Tattoo product called 21 Tattoos.  Instead of the old penny pack Tattoos, which offered a slab of gum and a single tat on the inside of the product wrapper, 21 Tattoos offered exactly what it said, on a large, folded sheet, all for a nickel.  With some modifications that eventually resulted in more of an accordion design, this style of tattoo would become the default from 1968 through the mid 70's and has been revived periodically since. 1971 Baseball Tattoos would be a great example of how Topps ended up designing their tattoos products in this accordion style.

After a year or so,  Topps also started charging ten cents for their tatoo products but in 1968 your nickel got  you this, as a recent eBay auction shows: 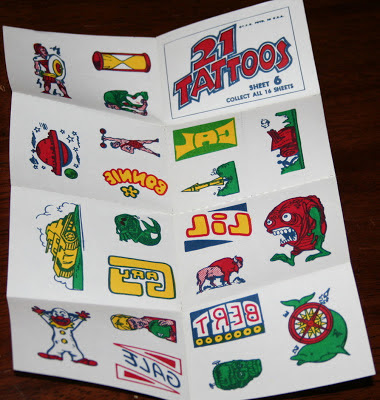 There are 16 sheets in the set (it you're keeping score at home that's 336 tattoos).  Panel 8, which I found yonks ago at a site labeled "Sportoys 2002" holds an expensive little surprise as the Sultan of Swat makes an appearance in the upper left corner: 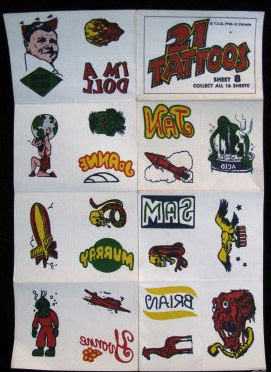 Anyone notice the reprint of Atlas from the 1948's Tatoo set? It's on the left side above the Zeppelin and below the Babe.  Here is the primordial version from '48:

The bottom right corner holds an image from 1965's Ugly Stickers. The first sheet shown above also has similar cribs although it is a USA sheet while the Babe above is of Canadian origin as I don't have a scan of the American version.

Wacky-packages.net even has an example of a pack: 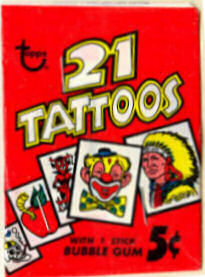 I'm not sure if this was for the product test or the name changed prior to testing but at one point the set was going to be called 21 Skin Pix. I presume someone let the Topps brass in on the joke at some point on that title! Here is the original artwork for same (for sale on eBay at this moment actually): 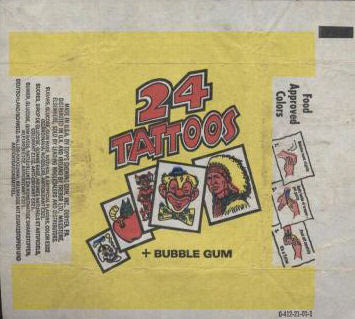 You can clearly see the same graphics were used for the front of the 24 Tattoos wrapper. In fact, the right side panel uses graphics first introduced in the 1949 Tatoo set (1948's had text instructions)-click back and see for yourself.

This particular set was more of a foreign affair as the indicia shows:

Yes, that says "UK and Ireland" and the distribution on this set was not done by Topp's traditional UK partner A&BC but rather Trebor Ltd.  Here, Nigel's Webspace has a couple of more bits on Trebor (use "find" in your browser to see).