Can I Have Your Autograph?

So I was stumbling around eBay the other day, just sort of window shopping, when this little baby caught my eye: 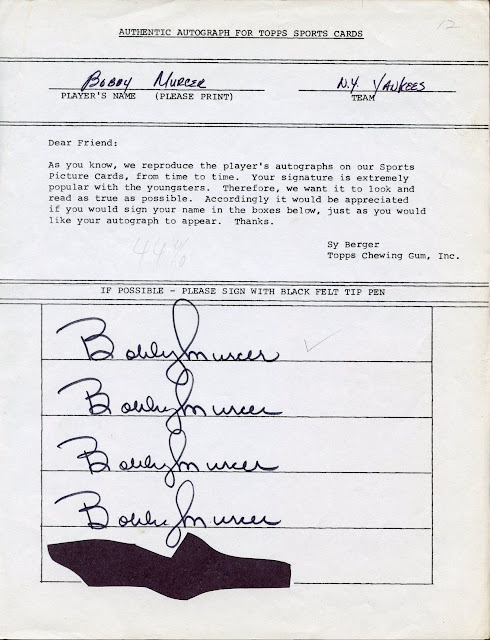 Now, in a testament to how screwed up I am with all this stuff, I asked myself "Self, how did they get rid of the line under Bobby Murcer's name?" My second thought was more like "Hey, why is one missing?" and then I moved on to wondering who had checked the first signature and written 44% on the sheet.  But as it turns out, I was asking the wrong questions. 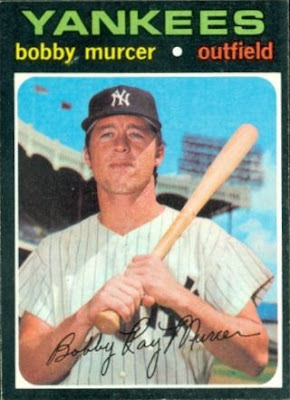 You can see how his signature evolved, can't you? The M in Murcer could still have been connected to the Y in Ray but he didn't link to anything early on. He made the cut for Bazooka in 1971 but no autographs there either, nor were there any on the 1972-74 Topps cards. Now the sheets says Yankees but that's just the team he was with when he signed his name in quintuplicate. In 1975 he's a Giant, being sent over to San Fran in exchange for Bobby Bonds, the first time two players making over $100,000 per year were traded for each other. And sure enough that's where we see the signature from the sheet: 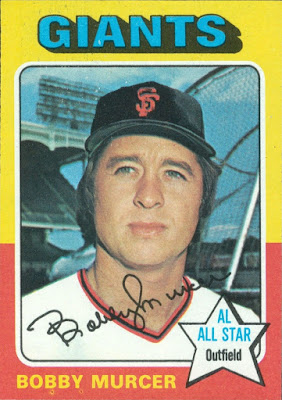 The 'bay also had a Billy Martin sheet, signed when he was with Texas. 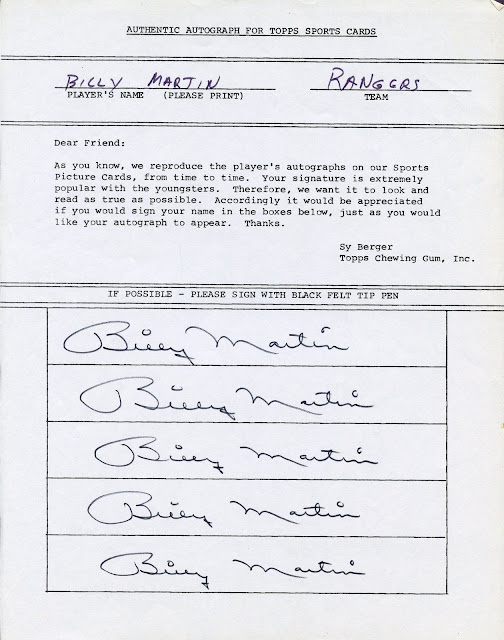 That stint lasted from 1973-75 and as seen above, there were no autographs the first two years.  Billy though, goes back to the ur-set in 1952: 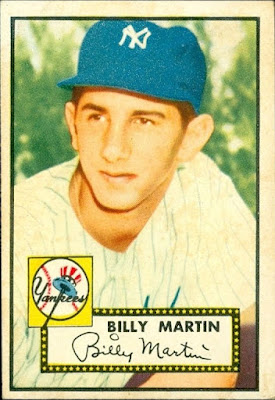 A couple points.  If he dotted the "i" in Billy, what the hell is that bubble above the two "l's"?  And he added a dash above the "i" in his last name.  WTF? So I got curious.

The next year with an auto is 54 and the dash is gone but not the dot/circle combo:

No autographs in either 1957 or '58 but in '59 he was back, missing top part of the bubble but retaining the dash:

There were no signatures again through 1962 and then no more cards of Billy until 1969 when he was shown as the Twins manager.  He won the West that year but knocked out two of his players in a bar fight in August and was summarily dismissed after the Twins got swept by the Orioles in the ALCS. As you can imagine, he was out of baseball in 1970 but the Tigers gave him a chance in 1971 and he ended up with a double bubble and a bit more of a stylized autograph, a lot closer to what's on the signature sheet but not an exact match for any of the five examples thereon, nor was he a Ranger at the time:

After the three year autograph hiatus in 1972-74, you would think his 1975 card would have an autograph but they used team cards like so: 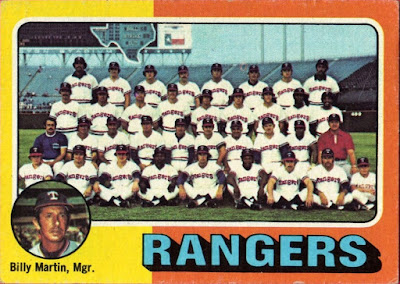 He became Yankees skipper in the middle of the 1975 season, then 1976-77 brought more team/manager hybridization before manager cards were en vogue again in 1978, although sans autograph. He got canned again in '78 then had no cards in 1979 or 1980 having been re-hired in mid-season in the '79 and getting fired again after the season ended.

In 1981 he got a good A's team red hot and ushered in "Billy Ball" but that was another team card/manager card year and then somehow he wasn't in the 1982 card set but did make the sticker set, which did not sport autographs.

Thanks for the interesting insight into the Topps design process. I think you are right... the facsimile autographs were too much of a headache to bother with most years.