I started delving into 1968's Batty Book Covers a few posts ago when discussing some Basil Wolverton original art used by Topps in that set and also the same year's Ugly Hang-Ups. 1967-69 was the era of very large Topps products and Batty Book Covers are no exception, coming in at 11 1/16" x 18 13/16".

Obviously designed to be used to cover textbooks, the set was clearly a 1968 issue as detailed on the box: 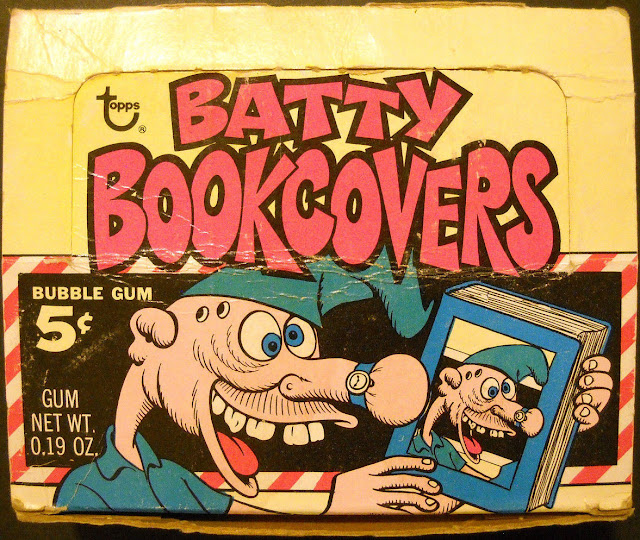 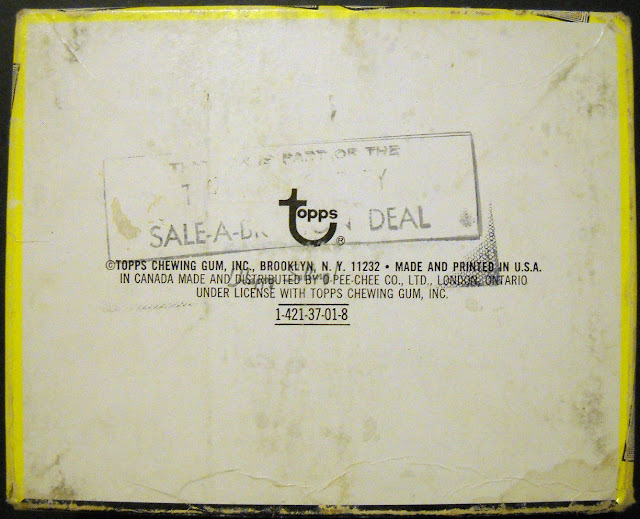 Looks like Topps had a promotional deal going on ("Sale-A-Bration") with this box, possibly indicative of poor sales.

The wrapper is, well, batty: 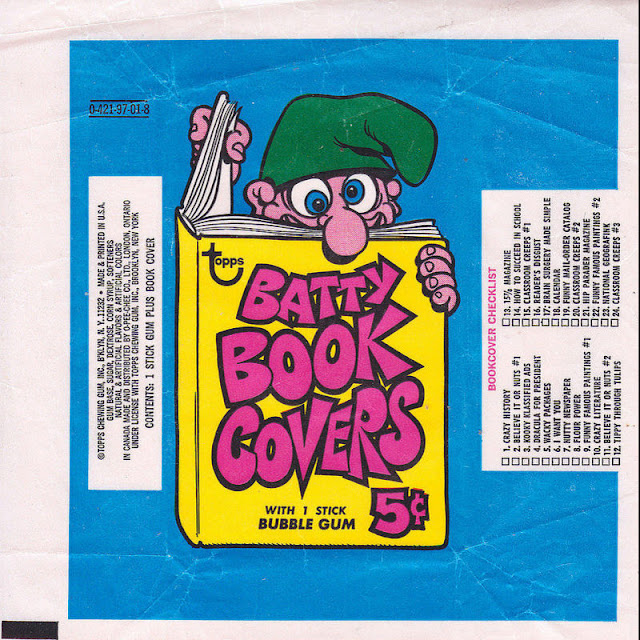 The checklist is handy but inaccurate: 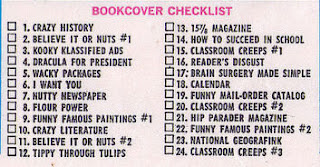 No. 5 is listed as "Wacky Packages" but it ended up being something called "Topps Is What's Happening" presumably because of worries over potential legal issues with the former's intended subject: 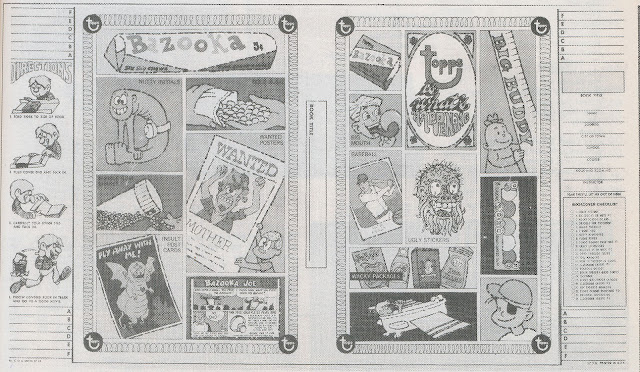 Intriguingly, you can see the baseball card depicted is a fair approximation of the burlapped 68's. No less than 13 Topps products are shown, including Bozo gumballs, which is helpful to me as I have been trying for ages to track when they went from bulk wholesale product to retail packaging. I like the checklist appearing on the product itself as well.

Here are a few others, it's a great (and very tough) set and the covers are quite fragile as these examples from an old Legendary auction show: 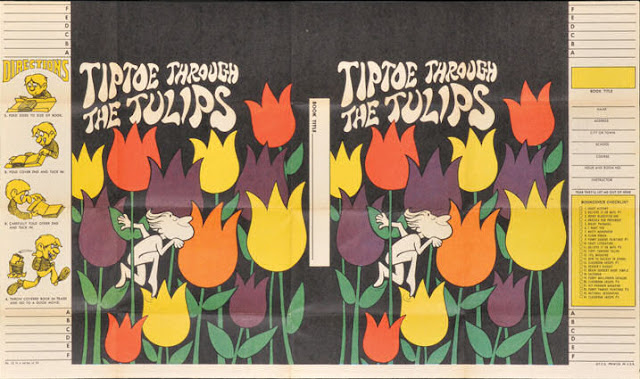 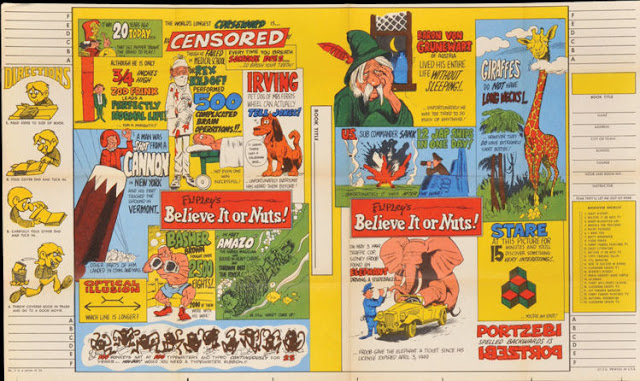 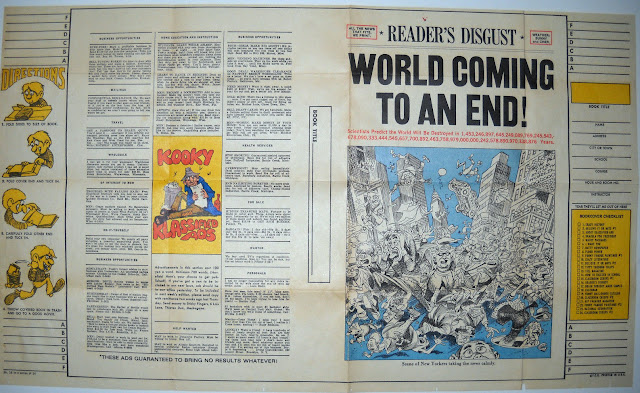 That looks like Paul Coker artwork on the left panel and I see Jack Davis's hand on the main part of the cover above.  The whole set is peppered with art from MAD artists and it's amazing.  Look at the ad section from the above example (click to blow it up): 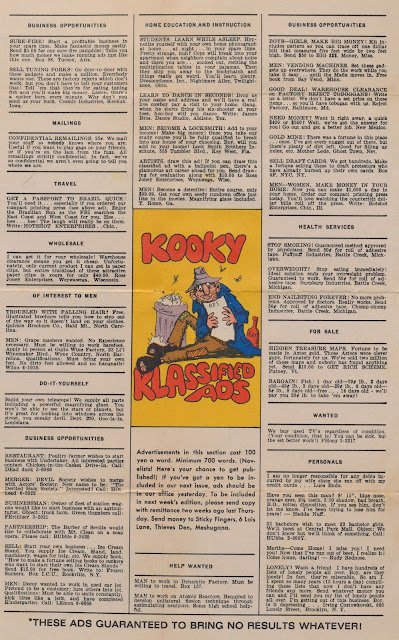 Here is more Davis, look at this tableaux! 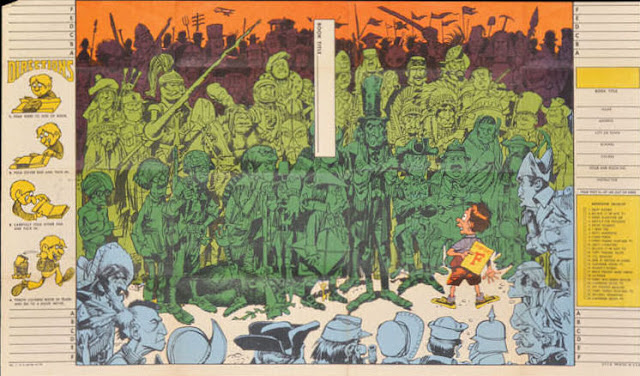 The left panel has the instructions and they are classic-check out no. 4:

Legendary also had a concept sketch from the set: 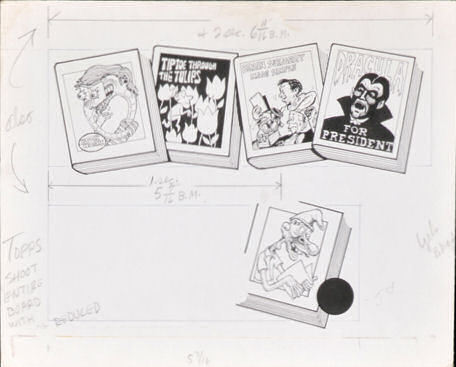 As much as my school-aged self would have loved to have a book cover featuring Jack Davis artwork, my first reaction to the product was "How long would a book cover coming out of a wax pack hold together?" I know I was pretty rough on my textbooks, which is part of the reason we used book covers in the first place.

...and then you mention in the post that the covers are "quite fragile" and I have my answer.