1969 brought a world of changes to Major League Baseball. A second wave of expansion swelled the number of teams to 24 and gave us the beginnings of divisional alignments and multi-tiered playoffs. Topps was forced to change too, with new photography being ordered for veterans and a massive set that, at 664 cards, was their largest to date. 1969 also marked the last year of things such as multi-player cards and five cent wax packs, so as one era ended another began.

Topps created a simple design for the 1969 Baseball cards and gave them backs with a pinkish/salmon color that was prevalent in many of their late 60's non-sports sets. I guess when Topps bought ink they bought it by the tanker truck full! The result was an easy to read reverse that expanded on the slimmer, vertically oriented landscape of the past two years and incorporated the curved lower case "t" Topps logo-its only appearance on a vintage baseball card.

Topps so liked the design of the cards in 1969 that they used it in two additional sets: a 48 subject decal insert with the regular issue and a 25 "card"/100 Mini Stickers set that was sold on its own. Today we'll take a look at the Decals.

They are quite colorful and measure about 1 3/4" x 2 1/8", although there is some slight variance in the cutting; as per below, some of this cutting may have occurred well after the last out of the 1969 World Series was caught by Cleon Jones.

The colored circles usually differ vs. the regular issue and the text is all black here whereas the cards used a two tone scheme. Actually, all of the colored circles may be different but I didn't really check those carefully.  What I did check was all of the poses. Almost of the images used for the Decals differ from those on the regular issue cards.

There are three types of photos used on the Decals when compared to the regular issue and I counted each type:

A couple of crops were so close I counted them as being the same.  The 8 tight crops I noted were obvious ones.  Here is an example of a cropped Decal photo: 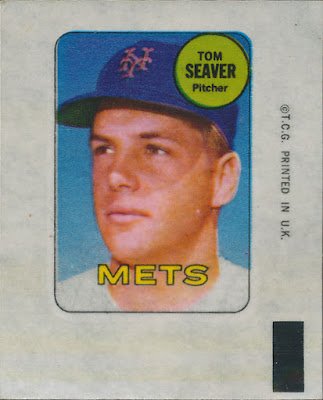 You can see how they used a tighter crop of the photo from the card: 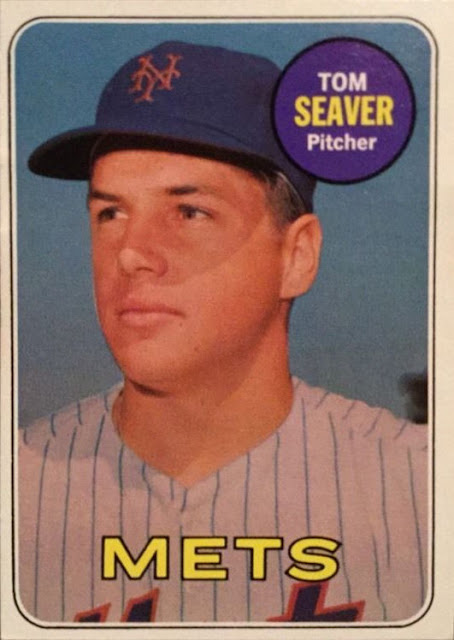 What the heck, here's the aforementioned Topps logo on the card back.  Sweet, huh? 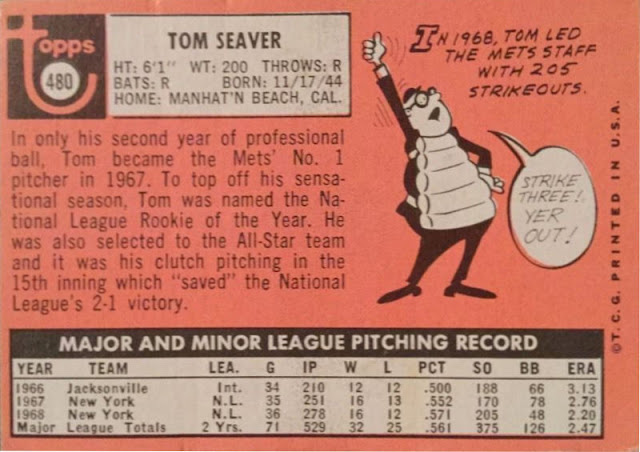 Now take a look at Tony Oliva's regular card vs. his Decal: 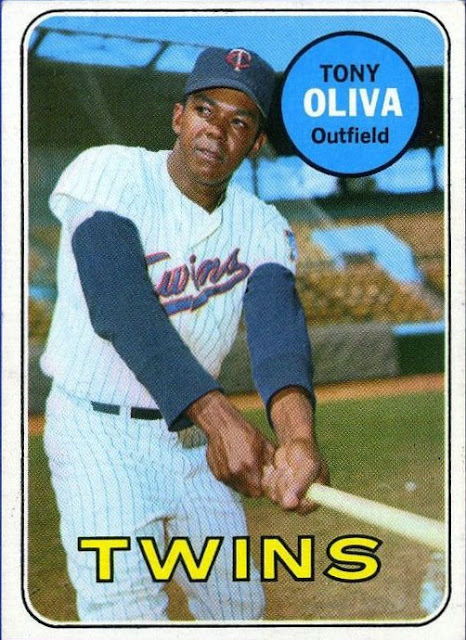 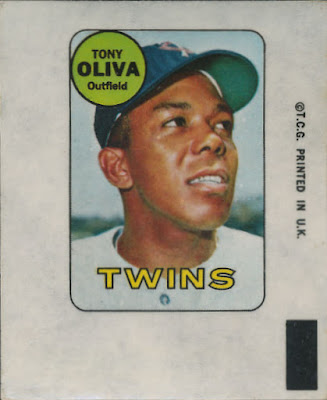 Two different photos were used obviously. I'll get into the reasons for this momentarily. It also worth noting Topps did manage to recycle his Decal image on a 1969 Super Baseball card though, just with a slightly bigger crop: 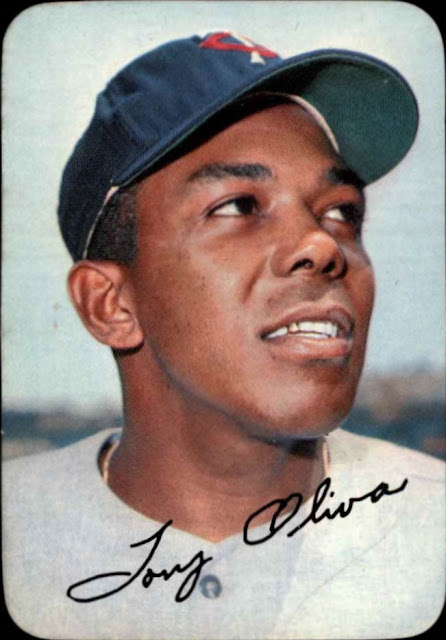 This makes a lot of sense as he was traded for Staub on January 22, 1969 (although Donn refused to report to the Astros) and this transaction allows us to pinpoint a date for the printing of at least one-half of the Decals. I'm trying to sort out which series' packs had the Decals (or, more properly Magic Rub-Offs) as the wrapper on the wax packs stated but the second series had them for sure, based upon PSA Registry details and Darren Prince's 1993 pamphlet Unopened Baseball Wax Packs, Boxes & Wrappers Price Guide. Prince goes on to add Series 5 to to the mix for the Decals, whereas series 3 and 4 had the Deckle inserts. Cello packs also held inserts, but not Rak Paks.

It certainly seems like they could have been issued in two series of 24 then and they are taken from all seven series of Topps Baseball, like so (print runs and series match in 1969):

Topps clearly did not have the higher series cards composed when the Decals were designed, which looks to have been right after the First Series cards were composed and printed. This timing led to so many different photos being used after the first series was mined for the Decals. Given the date of the Staub/Clendenon trade, Rusty being with Houston on his Decal, plus the fact Hoyt Wilhelm is shown as an Angel on his (he was traded to the Angels on December 12, 1968 from Kansas City, who had taken him in the AL expansion draft two months prior), we know the design was locked in between 12/12/68 and 1/22/69. Topps had more time between composition and printing than they were used to though, as you will note they were printed in the U.K.

Topps used a London company called Letraset, who specialized in this style of ruboff decal, to print these, and you can see how sharp their work was. That's because Letraset was well ahead of anybody with this technology at the time. Nigel has the scoop on them, at least on the Football side. Topps licensed from or used Letraset to produce a couple of non-sports sets as well in the early 1970's.

The decal image was printed on the reverse of the clear, thick, cello top layer.  A bottom layer of very slightly waxed paper had to be peeled off before the decal could be applied.  Take a look at the back of one for goodness sake: 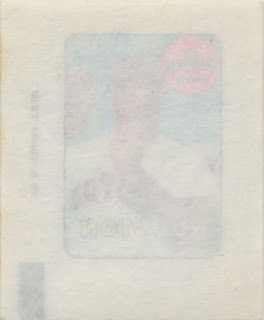 A number of finds, both of cut and uncut decals (on long rolls) have surfaced over the last 15 for so years and finding high grade examples is not difficult. Many of these rolls have now been cut up and graded (don't get me started on "sheet-cutting" and TPG's!)

Here is the Decal checklist, ordered by team, showing the Baseball series each player was in. All teams have two subjects, except the Angels (3) and Royals (1), thanks to the Wilhelm trade. The table also shows poses and card series:

I love these little inserts-they are among my favorites of this era.

And! They actually airbrushed a couple of logos onto hats with this series instead of blobbing old ones out.

Didn't realize there were so many different poses

Here are some others from the decals set (the ones I have).

Can anyone explain why this eBay listing for 1969 TOPPS decals is for a sheet as opposed to a strip? has anybody seen one before?