Continuing on in the magical year of 1969, today we take a peek at Topps Super Baseball, one of the first Topps "premium" sets (in the "high value" sense of the word). It's been discussed here before but given the canvass of the Topps baseball issues we've been working on here at the Topps Archives Research Complex another look is certainly in order. 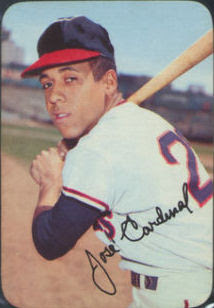 I won't get into the specifics on the backs (been there, done that) but do want to look at potential printing dates. Given the fact 1969 was an expansion year with four new teams added in one season for the first time, Topps did a great job keeping things straight in this set, especially compared to the Decal and Deckle inserts that appeared this year.

However, thanks to a specific transaction, the dating of the set is fairly easy. On April 25, 1969  Dick Selma was traded by the Padres to the Cubs. 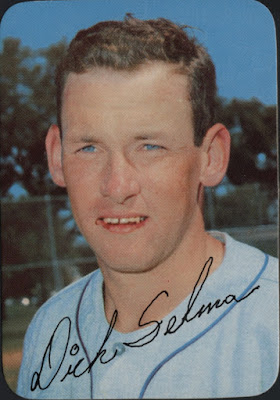 Given the (almost) alphabetical ordering of the set (by teams in each league and then players on each squad) it's easy to figure out Selma was to have been a Padre in the set. So the set was composed before the trade date of April 25th for sure.  In terms of a start date, I have to think it was after the Decals and 4-on 1's were created, given the lack of anarchy in Super Baseball. Selma, who was numbered one behind his fellow Padre Ollie Brown in the set, likely replaced somebody else whose name preceded Brown's. Based upon their expansion draft picks and active roster for the season, only three players are possible: Jose Arcia, Steve Arlin and Jack Baldschun.

Arcia was a light hitting utility man with one season in the majors when the Padres selected him in the expansion draft.  No way it was him.  Arlin was taken in the same draft but had never pitched in the majors before he debuted in '69, so it wasn't him either. Baldschun was released by the Reds before the start of the season and  on April 12, 1969 was signed by San Diego. He stuck with the team for the entire season and could have been the other intended Padre.  I'm guessing Topps had slotted him in then found they had no suitable photo of him (the set showing only certain poses) so they grabbed whatever was handy, namely a shot of Selma.  That puts a potential two week window in early April on the table, assuming my guess work on Selma is right.  If not and it was just a screw up, then early March seems likely to me.

(UPDATE 4/24/16: Friend o'the Archive Keith Olbermann has pointed out the trade of Joe Torre to St. Louis from Atlanta on March 17th marks an earlier lock in date and the Mickey Mantle retirement announcement of March 1st may push this back to February at the latest. At least I'm consistent, the longer I run an arc, then more screwups I make!)

No matter, it's a great set.  Here's a checklist in team order for you all.  Note how Kansas City is out of order as they should precede Minnesota:

I was 11 yrs old and I'd hang out in front of the local supermarket and carry groceries for tips, then run to the candy store and buy a few packs of these. I was lucky and got all the Mets (Mets fan here) in my first 6 or 7 packs. I was disappointed there was no Agee but he did surface in the 70 supersize, IIRC. Great times :)