Well campers, there was some big time stuff on display at this year's National but by my estimation one item sat atop the heap. Many of you have undoubtedly seen the article on Sports Collectors Daily about a large stash of vintage unopened packs from Topps and Bowman unearthed by Mile High Card Co. Among this array of goodies was an unopened 1968 Basketball pack, a heretofore unseen objet d'hobby! 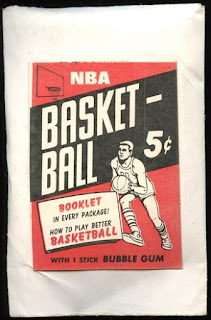 The pack, which is being auctioned in September and will undoubtedly go for major bucks, was the one thing I truly made a point to check out in Chicago as I was curious about the never-before-seen insert described on the wrapper (opened packs, which are really envelopes, have been seen previously) and to see if it fit my theory of it being derived from a 1963 Hood Dairy booklet. After gawking like a little kid at the candy counter, I asked one of the guys at Mile High about the pack contents, to which he replied "we also have one that was opened, would you like to see it?". Yes, please!

I then was led to this sight:

And just like that, two mysteries were solved.  If you haven't clicked through above to some of the Hood Dairy booklet scans I will end the suspense and confirm that above "How To Shoot" instructional is descended one of them and it was indeed folded to fit within.  The interior is set up like a small comic book by the way, very typical of the early 1960's. As for the rest of the pack, three cards (all HOF'ers in this case) were what you got. I recall the back of the booklet was blank.

Those B&W cards are similar to other produced by Topps in the mid 60's but the envelope style pack is a rarity, with only a couple of other sets having been associated with them over the years.  The card style was an easy one for Topps to produce but I suspect they were created for multiple purposes. The envelope is a little trickier but I think it ties in and will describe how momentarily.

First, here's Friend o'the Archive Keith Olbermann on some specifics about this pack (and find), after inquiring further with Mile High:

"These packs came from a family that operated a confectionary company that distributed non-sports trading cards. Apparently, the companies exchanged information with one another and the packs were likely acquired directly from a Topps executive in order to get feedback, since they were not a competitor in the sports card market. On much of the unopened material that they acquired, they made notations showing the date of acquisition. The unopened pack has the notation “3/6/68,” which would support you claim that they were produced and distributed to select people during the 1967-68 season."

My previous thoughts on the envelopes and B&W cards is that they were used in a lab test setting, i.e.a controlled environment.  Topps routinely had at least a three phase process when testing cards in the 60's:

1) Lab Test (observing kids in a research facility play with the cards).
2) Field Test (executives handed out cards at local schools near the Topps plant in Sunset Park, Brooklyn)
3) Retail Test (a select few stores in select few regions or areas--again mostly in Brooklyn--would get a box or two)

We now have a fourth option, namely an industry oriented informal review.  Mile High thought the cards were made up to show NBA executives how such a product would work, which is also a possible avenue of limited distribution.  So really, except for the retail test, which more closely resembled the standard retail counter display model, the envelopes and B&W cards could have been used for any or all of the other four options.

The Mile High comments also reiterate Olbermann's position that the set was issued during the 1967-68 season.  All-in-all this little bit of the larger find has filled in and confirmed some key points.

Next question: what will the unopened pack go for?!

Update 9/16/17 - The pack went for $16,693.20.  It also seems likely the paper envelope test packs were used because the inserts, even folded, were too big and/or too floppy for a standard sized pack.
Posted by toppcat at 8:00 AM

Your blog is the only time I ever get to see these cards, and I never get tired of reading posts pertaining to this set.