I've been reorganizing the files here at the Main Topps Archives Research Complex and have been rediscovering a few things along the way.  To wit, this internal Topps memo from 1963 as the season's Baseball card shipments got underway.  The contents give a glimpse as to how Topps distributed their cards: 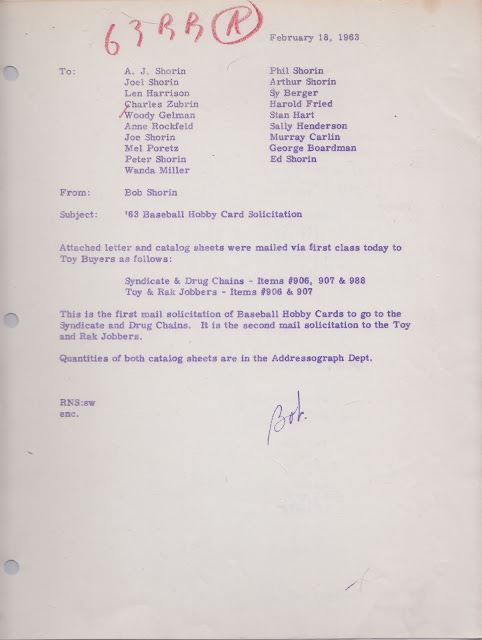 Each channel of distribution had its own peculiarities.  The "Syndicate and Drug Chains" got one additional configuration of packaging than the "Toy & Rak Jobbers" did..  I am not really conversant with the hidden language of the item numbering before the Commodity Codes were introduced in mid-1966, so am not clear on what that additional configuration was, but I can speak to how this was organized.  Also unclear is if this grouping  includes Woolworth's, which as a key early Topps retail partner.

Some time ago I posted a 1949 order sheet for a "Syndicate" that Topps distributed to and was a massive operation at the time, representing over 3,000 retail stores.  I've seen references to the drug chains previously as well, in particular Rexall's, which sold 1952 high numbers as far away as California.

Toy & Rak Jobbers makes sense to me as I used to buy Rak Paks at a toy store on Long Island in the early 70's.  That's two distribution channels without even mentioning the old tobacco jobbers (wholesale distributors) that had serviced Shorin products going back to the American Leaf Tobacco Company days that spanned 1908-38.

I have misplaced an article detailing how the various Topps unions and shifts dealt with specific jobbers but if I remember it correctly, certain unions or locals in Duryea only handled accounts for specific jobbers and I think it even divided up by shifts. So if you belonged to Scranton Local 229, you might only have been able to work on packing shipments going to the tobacco jobbers.

Some further research shows that Topps sold 12,000 card vending cases directly to some dealers (Fritsch Cards for sure), although I'm not sure how far back in time this goes, but the earliest days of Sam Rosen (later Card Collectors Company) in the 1950's are possible.

Foreign distribution, particularly to Venezuela, would have been handled in a similar manner, i.e. through some type of international distributor, but would have involved some type of customs clearance broker I would imagine.

The effort to market was immense as there were multiple series of Baseball cards each year back in the 60's. Topps had about 18 departments plus the executives handling everything from addressograph maintenance to ensuring ballplayers got their stipends or merchandise orders to run smoothly. I remain amazed how they were able to carve profits from these various exertions!

I'll see what else I can turn up on these distribution channels as I really want to find that article describing how the unions and shifts tied to the jobbers.

"Syndicate and Drug Chains" sure sounds ominous, doesn't it?

I do remember buying baseball cards at "Drug Fair", a large pharmacy chain, back in the 1970s.