I've been reviewing a small mountain of old hobby publications these past few months and am presently in the midst of a mid-70's run of Sport Fan, which was put out for many years by Bob Jaspersen.  If there was ever a hobby 'zine that resembled a gossip sheet, I suspect Sport Fan would be case #1, although most publications of the era had a lot more personal notes in them than anything put out since the mid 80's. Reports of specific cards at specific prices changing hands were commonplace and a lot of convention and gathering photos were taken with collectors wives' portrayed in the pictures the accompanying articles and not just in Jaspersen's publication. Hell, I would have loved to have attended some of those mid 70's soirees, some were even held in taverns!

One of the more common features in Sport Fan (and other hobby pubs of the day) was massive coverage of collector's conventions, which often ran on for three or four very informative 8 1/2" x 11" pages. By 1975 the larger gatherings were garnering media attention and the Sixth Annual Mid-Atlantic Sports Collectors Association (MASCA) show held the last weekend of April outside of Baltimore was no exception. The show was well extremely well attended and brought at least one notable figure to town: Sy Berger, Sports Director of Topps.

Berger was interviewed on Convention Eve by local radio host Ted Patterson on WBAL and this may be where the legend of the 1952 Baseball High Numbers getting dumped at sea began. Sport Fan has the front page scoop: 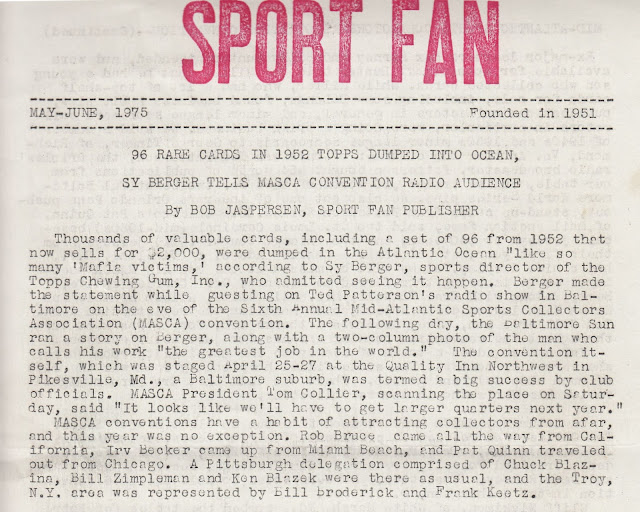 As readers of this blog know, I do not buy the story and have been looking for its origins for some time now. It's possible Sy trotted this tale out prior to this but the next day (4/25/75) the Baltimore Sun ran a piece highlighting it (and Sy) that would certainly have given it legs with the hobby and without: 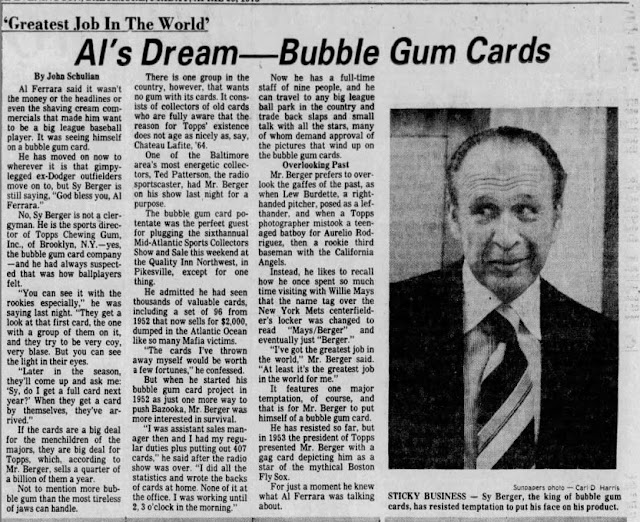 I'm surprised he didn't add something about cement shoes to further embellish the narrative! Also, it's 97 cards in the series but that's a minute point. Bonus chestnut in column one's penultimate paragraph: the 250,000,000 cards printed annually story, first promulgated around 1959 IIRC. Classic shot of Mr. Berger though!

I have nothing against Sy and in fact consider him a true innovator, a fantastic PR ambassador for Topps and an astute businessman but for reasons I've discussed here previously just can't believe this tale and have to think it was all "corporate PR" fluff as he was certainly a man to toe the company line. No matter, the 52 highs are legendary and so is Sy!

This will be my last mid-week pandemic post and the blog will be returning to its standard, weekly  Saturday posting schedule. Hopefully it's been a little bit of a diversion these past couple of months for some of you.
Posted by toppcat at 8:00 AM