Wax On, Wax Off

It's funny what's turned up in Topps packs over the years: plain white gum separators through the mid-50's, cello wrapped caramel in 1951 and a string of contest and premium offer cards in the late 50's into 1960.  Topps then moved into more familiar inserts starting with the 1960 Football cards, which for the most part ended in 1971 for Baseball and Football. In retrospect these were clearly sales stimulators so long as costs allowed. In 1967-69 though, something else made an appearance that not too many folks know about.

Ads, specifically in-house ads for upcoming inserts and sets, are what came in certain wax packs these three years. The first one I'm aware of is this little bit of wax paper from 1967, roughly the size of the era's penny Bazooka comics: 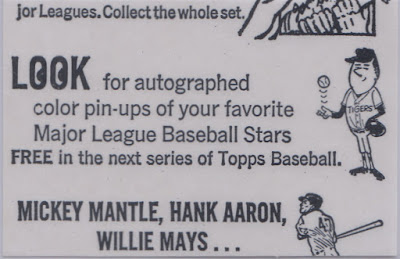 Love the Tigers player and his knowing look!  My research, which is admittedly a bit limited as I am just in the training wheels stage when it comes to the series-by series specifics of vintage Topps wax packs, shows the Pin-Ups were issued throughout the season (they are known in 2nd, 5th, 6th and 7th series cello packs for sure), so I'd imagine these were found in 1st series packs.

QUICK SAME DAY UPDATE:  I found this commencing with the Classified Ads in the March 1972 Issue of The Trader Speaks.  Same pitcher, slightly altered facially and on the uniform and I suspect Woody Gelman had a hand. He appeared, along with his battery mate, in TTS until the last Dan Dischley published issue came out in September 1983, save one or two occasions):

1968 brought an ad for the Game cards, complete with cursory instructions: 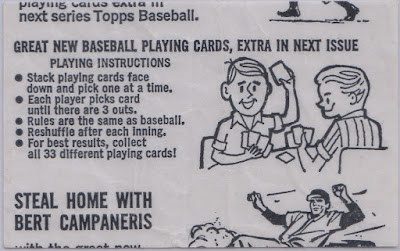 From Mantle, Mays and Aaron to Campy, who was a helluva player but not in the same zip code as those guys, and I suspect at least one other player, if not more, was named (see batter's ankles and feet at the top). The Game cards seem to have started showing up in 4th series packs, so these would be from the 3rd series. However, that wasn't all. The 6th and 7th series wax packs carried two tones of Football preview: 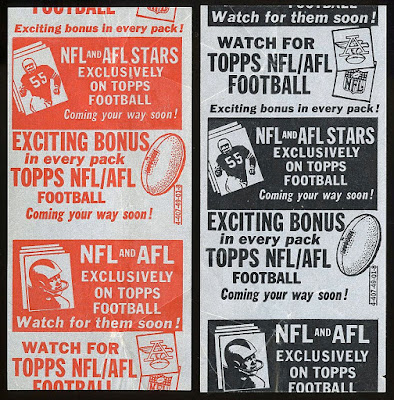 These are noticeably larger (much taller) than the Baseball waxy inserts and according to Darren Prince's 1993 Wrapper and Pack Guide, came in 6th and 7th series packs. Dig the commodity codes and fold lines - were these printed and actually folded in with the wrappers?! 1968 was the first combined NFL/AFL set issued by Topps and they clearly intended to make a big splash.

1969 seems to be the end year for the waxy inserts, possibly due to rising costs; remember, ten cent "cello" packs debuted this year to mimic the Baseball wax in a large scale pricing experiment and the dime wax pack debuted for real with the '69 Football release (and some Non-Sports issues).  Friend o'the Archive Dave Schmidt sent me a scan of the installment from '69 as I have not yet found one of these (the others are from my collection): 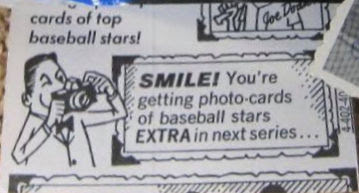 The Deckles debuted in Series 3 but there were also the Decal inserts in 1969 so it's possible another  ad insert exists for those.  Prince has the Decals ("Magic Rub-Offs" actually) as appearing in 2nd and 5th series packs so I'm not sure what's going on with that.

I've also just gotten this one in from across the pond, it's from Topps UK: 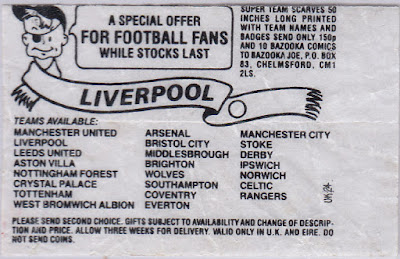 That little, oddly-fonted ID number off to the right says "UK 24" which didn't help with dating but I found a Footballer wrapper from 1979-80 over at the awesome Nigel's Webspace that helped zero in on it: 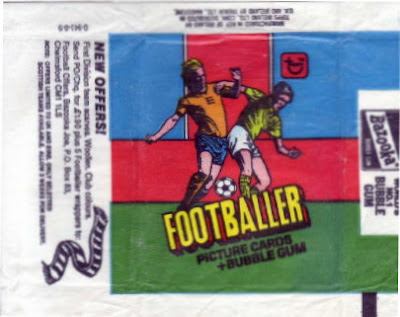 Sorry for the murk, I found a better scan of the offer, which is not an exact match to the insert but fairly close:

While being fairly non-conversant with the ins-and-outs-of the English First Division teams of the time, I did know Celtic & Rangers were both from the Scottish League so I had to do a little research. The last season Topps issued Scottish League cards was 1979-80 (in their own set) and the English League teams (first and second division) were in the set this wrapper enclosed. so the timing fit. I then found 21 of the 22 first division teams that played that season on the insert, missing only Bolton, which was by far the worst team in the league and ended up relegated (and likely just ignored by Topps UK) along with Bristol City and Stoke, both of which made the scarf cut as a booby prize I guess. This waxy insert must have part of the Bazooka Joe comic series over in the UK in either 1979-80 then, or the next season if they were burning off excess premiums.